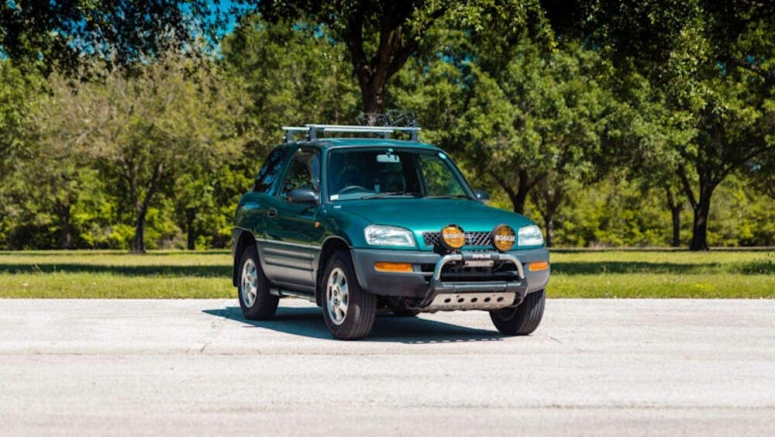 Need a good dose of 1990s nostalgia? How about this all-wheel drive JDM 1994 Toyota RAV4 listed on Bring a Trailer with no reserve?

The 1990s were the decade of green. Name a car or truck, and it probably came in at least one or two shades. Your author's family had not one, not two, but three different cars painted in various shades of dark green simultaneously: a 1996 Volkswagen Passat VR6, a 1994 Dodge Caravan and a 1996 Dodge Dakota. This RAV4 would have been right at home next to the bright red Toyota Tercel that shared the same driveway.

Japan's government is to add pneumonia caused by the new coronavirus to the list of designated infectious diseases on Tuesday.

Members of Prime Minister Shinzo Abe's Cabinet will approve an ordinance giving the illness designations under the country's infectious disease and quarantine laws.

A private-sector credit research company says a total of 34 listed firms operating in Japan had buildings and production equipment flooded or destroyed as a result of Typhoon Hagibis.

The tally was compiled by Tokyo Shoko Research, based on data released by listed firms by Wednesday on the storm's effects on business operations. Hagibis ripped through Japan last weekend.

A Toyota dealership in Florida that briefly had a 2020 Supra listed for sale at an exorbitant $198,563 claims to have ultimately sold the new sports car for $100,000.

Cost markups accompany every hot new product, the Honda Civic Type R and Jeep Gladiator two recent examples of the "added dealer markup" virus. In the background, Toyota dealers have spent the entire year honing their ADM approach to the 2020 Supra. In January, Toyota of Cool Springs Tennessee appended $25,000 to the $55,250 MSRP of a Launch Edition Supra. In March, Larry H Miller Toyota in Colorado Springs wanted $50,000 over MSRP for a regular, series-production Supra, and tried to make that look like a bargain by saying the first-ever Supra sold for "more than $2,000,000 over MSRP at an auction." Last week, Jerry's Toyota in Baltimore combined those approaches, posting a Launch Edition Supra for the "Internet Price" of $100,000. The Nocturnal Black sports car is one of 1,500 Launch edition models, all of which come with special bits like red mirror caps, matte-black wheels, and a carbon fiber plaque on the dash. Other than the red leather interior, which isn't available on the standard car, there's nothing bolted on that couldn't be added to a series Supra for a lot less than $50,000. As a touch of garnish for those thirsty for a Supra, the small print informed all that the $100,000 "excludes taxes, tags, and $300 dealer processing charge." There are no check-swings at Jerry's. It didn't take long for the listing to make the fiber optic rounds, because the Internet. The dealership removed the page, but a screenshot for the listing will live forever, because Internet.  Now that the figures are getting wide press, dealers might stick to phone calls only to discuss pricing. The SupraMkV forum has a thread specifically for comparing markups and finding dealers selling at MSRP. One post says, "I think this is a record: West Covina Toyota: $120,000," but there's no link and the dealer doesn't have a listing online. There's no reason to think that will forever be the limit, either. In another SupraMkV thread, a poster uploaded phone screenshots of a conversation with dealer supposedly in the San Francisco area. The salesman wrote of the Launch Edition ADM, "[We] are only getting one a year and it's whoever pays us the most will get the car." If you've heard about rents in San Francisco, you'll know that means someone could throw a lot of money at the Supra. Our dealer ADM creativity award still goes to Dodge dealers for the Challenger Demon. Dodge set the mousetrap by prioritizing allocation to dealers that signed notarized promises to sell the 808-horsepower dragster at or below MSRP. So what did the enterprising mice do? They auctioned build slots on eBay, then sold the car to the winning bidder at MSRP. Coincidentally, around $100,000 is what the Supra's chief engineer said the carmaker would need to charge if Toyota had gone it alone and developed its own chassis and inline-six cylinder. For anyone wanting a Supra for a little less, patience and the SupraMkV forum are your best bets.

Two magazines put two 2020 Toyota Supras on two dynos in two parts of the country on two different days. Both magazines came to the same result: Toyota underrated the power figures of the particular Supras being tested. In May, Car and Driver strapped a Supra to an all-wheel drive Dynojet dynamometer in Livernois, Michigan. CD's figures came to 339 horsepower and 427 lb-ft of torque at the wheels. After that, Motor Trend strapped a Supra to a Mustang eddy-current chassis dynamometer in Torrance, California. MT's weather-corrected numbers came to 332 hp and 387 lb-ft.

Toyota's official numbers for the 3.0-liter turbocharged inline-six cylinder sourced from BMW are 335 hp and 365 lb-ft, measured at the crank. Using the hoary conventional wisdom of driveline and hydraulic losses causing 15 percent of power to evaporate before reaching the wheels, we'd expect the Supra's power at the contact patch to be around 285 hp and 310 lb-ft. Even updating that parasitic loss figure to 10 percent for a modern drivetrain, we're still at around 300 hp and 328 lb-ft.

Fujifilm's upcoming mirrorless camera the X-T100 is expected to be announced soon, but it seems that leaks ahead of the announcement have pretty much given everything away. In fact the latest sighting on camera retailer Adorama's website has revealed the potential price of the upcoming camera.

According to the listing (which has since been removed), it seems that the camera could be priced anywhere between $550 to $600 for the body only. This means that you will need to purchase the lens separately, or if you're already a Fujifilm user with a collection of X-series lenses, then you can just buy the camera body only.

Will they? Won't they? That is the question that some gamers are trying to figure out because according to the rumors, Diablo 3 for the Nintendo Switch is in the works. However Blizzard seemed to have dashed the hopes of many when they said they had nothing to announce regarding Diablo on the Switch.

Despite the somewhat official stance, the rumors have persisted and now according to a listing on retailer Coolshop which is based in the UK, Diablo 3 for the Nintendo Switch has been spotted yet again. Now it is possible that Coolshop is simply listing the game based on the rumors and is trying to get ahead of the competition.

If the rumors are true, Fujifilm is expected to officially announce the Fujifilm X-H1 mirrorless camera in the next couple of days. We have been hearing about the camera in a steady stream of leaks, with the most recent revealing the possible design of it. However none of this is official yet so there was always the off-chance that it could all be one massive hoax.

However it looks like the rumors have since been corroborated by Amazon, who for a very brief moment actually listed the camera on its website. This was spotted by the folks at Fuji Rumors who were quick enough to snag some screenshots before the page was taken down. The listings were for the X-H1 (body only), the X-H1 with grip, and also the vertical grip accessory for the camera.

Is it the beginning of the end for the Fujifilm X100T? The camera has been listed as discontinued on B&H Photo's website. This isn't the first time we've seen this camera show up on an online retailer's website as discontinued; Digital Rev showed it out of stock back in September 2016, though it currently lists one version the camera as 'in stock.'

A brand-new Lexus LX570 with no roof has showed up for sale in the Middle East asking for a really serious amount of money.
History has taught us that chopping the top off an SUV is an exercise that really hasn’t worked for any car, with the only exemptions to the rule being the Jeep Wrangler and other similarly-minded vintage off-roaders.

Sony Mobile could be planning to release the Xperia Z3+ into the United States judging by the official website. The Xperia Z3+ listing on the Sony Mobile US website popped out of nowhere at the end of last week and is listed as “coming soon”.

A number of Sony Smartwatch 3 owners have been patiently waiting to see when the company will launch the metal wrist strap. Up until now, the SmartWatch 3 has various official straps available for it (including Stainless Steel and Leather) but only when bought with the watch i.e. Sony has not sold the straps separately.

Clusters of pale pink cherry blossoms have painted the face of Mount Yoshinoyama here, a World Heritage site, as tens of thousands of sakura are now in full bloom.