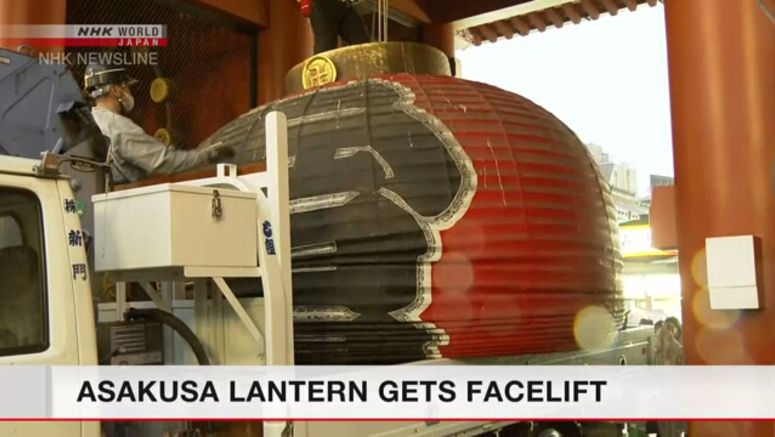 An iconic large lantern in Tokyo's Asakusa area has been removed from a temple's main gate for the first time in seven years for repair work.

Many visitors in the area take photos in front of the lantern at the Kaminarimon, or Thunder Gate, of Sensoji Temple.

Many people are visiting the site of last month's arson attack on a Kyoto Animation studio on Sunday, ahead of the removal of an altar.

Mourners are visiting the altar to pray for the dead and injured, as well as leave flowers and other offerings.

The organizing committee of an ongoing international art festival in Aichi Prefecture, central Japan, says exhibits in a section themed "Deprivation of Freedom of Expression" will be removed because of threats.

The prefectural office, which is acting as a secretariat for the Aichi Triennale Arts Festival, has received critical opinions about the section, in which a statue of a girl symbolizing those referred to as wartime comfort women, was being displayed.

The official page for enrolling in the Android Q beta 3 only mentions that six previous Pixel smartphones are supported. They don’t include the new handsets but the website mentions that the “Pixel 3a and Pixel 3a XL will be eligible in June.”

Nissan shareholders have removed former Chairman Carlos Ghosn from the company's board.

Ghosn no longer holds any post at the company, ending a nearly two-decade relationship.

Nissan shareholders have approved the removal of former chairman Carlos Ghosn from the board.

Ghosn no longer holds any post at the company.

An Israeli semi-governmental organization says it will apologize for the removal of a memorial to a Japanese diplomat who helped save Jews during World War Two.

While working at the Japanese consulate in Lithuania during the war, Chiune Sugihara issued transit visas against orders. His humanitarian deed enabled Jews to flee from Nazi German persecution, saving as many as 6,000 lives.

On July 2, Johnny's & Associates revealed via their official website that Kanjani8 member Yasuda Shota had a tumor removed from his brain back in February of last year.

They stated, "In February of 2017, Yasuda received surgery to remove benign tumors from his brain called meningioma. The surgery was a success, and he continues to do well today.  While he was steadily recovering, he fell down on April 9, 2018 due to dizziness and fractured his back and hip, which required 3 months to recover. This is the reason why he was unable to participate in Shibutani Subaru's press conference."

The last time we saw an Android tablet from Google was back in 2015 where they launched the Pixel C Tablet. The company did not launch anymore tablets after that and in 2017, it was reported that they had stopped selling it. This is why it doesn't really come as a shock to learn that Google has since removed the "tablet" section from the Android website.

Like we said given that Google hasn't really bothered updating the Pixel C Tablet since it was first launched 2 years ago and with Google keeping mum on Android on tablets, it almost feels like they've given up. To be fair Google isn't alone in this. Companies such as Samsung and Motorola have in the past put out a fair number of Android tablets, but this has waned in recent years.

These days ditching the 3.5mm headphone jack on smartphones is becoming increasingly common. This is exactly what Sony did with the Xperia XZ2 that was launched at MWC 2018, and it looks like Sony has recently come forward with an explanation as to why they have decided to remove the port.

According to Sony who posted an FAQ on its website, "This is part of the shift to our new Ambient Flow design language. In order to create the beautiful seamless design, our designers needed to remove the headphone jack. Plus, we're aware of the major market trend toward wireless headphones over wired headphones."

Bandai Namco's Tekken franchise is an interesting one. While other arcade games might have more traditional characters, Tekken actually introduced some interesting and quirky characters such as bears, pandas, a man made from wood, and so on. They also introduced a character named Roger Jr., which is a kangaroo that boxes.

Unfortunately it seems that the character will no longer make the final game in Tekken 7. In an interview with VG247, the game's producer Katsuhiro Harada, it seems that there are concerns that animal activists would complain about the character, which is why they made the decision to take it out of the game.

Over time, Sony Mobile has removed a number of features (or software) from its Xperia smartphones that its users found useful. For example, in recent years, Sony Mobile has moved away from its ‘two-day battery life’ smartphones that defined its portfolio a few years ago, including the very popular Xperia Z2 and Z3. Nowadays, Sony promotes the quick charging ability of its phones, but in our view there still remain very few flagship phones that make battery life a priority, which Sony could have exploited.

The operator of a new elementary school under pressure for purchasing state-owned land at an unusually low price has deleted a message from Prime Minister Shinzo Abe's wife Akie, its honorary principal, from its website.

Thirty-two stone lanterns that have lined the road near the Ise Jingu shrine for almost half a century are to be removed for fear that they may fall over during the Group of Seven summit to be held nearby.