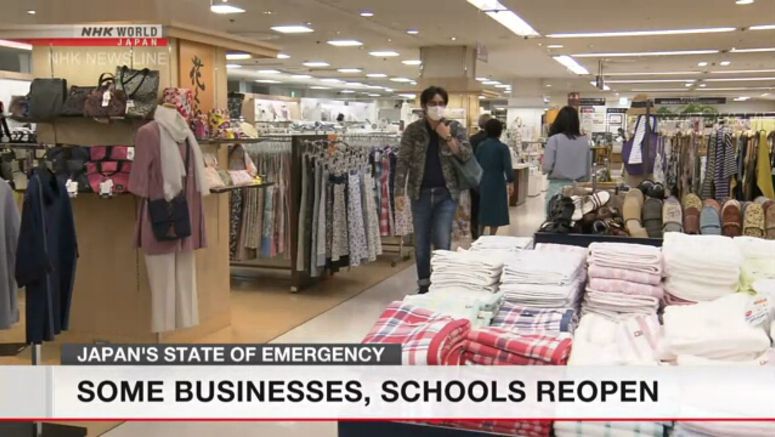 A major department store in Gunma Prefecture, north of Tokyo, resumed most operations on Monday.

Apart from its food section, Takasaki Takashimaya in Takasaki City had been closed since April 18, one day after the central government expanded the state of emergency for the coronavirus outbreak to the entire country.

Seven-Eleven Japan says it wants to be flexible when it comes to its 24-hour operating policy. Franchise owners and company officials will work out how long stores will stay open.

A Japanese discount store chain says it will suspend alcohol sales at one of its Tokyo outlets for two days to help prevent disturbances during the Halloween season.

Don Quijote announced on Monday that alcoholic drinks will not be sold at its Shibuya Ward store on Saturday and October 31.

The Xperia 1 is now available to order through the official Sony eStore in Europe. The handset is in stock in the UK portal available for £849 with black and purple colour options. Also, if you're quick you can claim a free pair of WH-1000XM3 headphones – only 130 headphones are available on a first come, first served basis.

It’s possible that you pre-order a game when it’s first unveiled but over the following days you decide you don’t want to spend your money on it. What do you do then if you have pre-ordered it through Sony’s PlayStation Store? A new policy has been enacted which does allow PlayStation Store pre-order refund but there’s a catch.

The refund terms are slightly different depending on the type of content purchased from the store. With the exception of a PlayStation Plus or PlayStation Now subscription, it will not be possible to get credit back for a purchase once the game has been played or even if it has only been downloaded. The only way you get your money back is if you don’t download the game in the first place.

It has been over a decade since Nintendo opened its first retail location in New York City. The company is now doing something similar for its home base. Nintendo has confirmed that the company will be opening an official retail store in Tokyo this year. This will be the first store that will be directly managed by Nintendo in Japan.

Nintendo’s Japan location will be located in Shibuya Parco which is the new flagship of the parco department store chain. The store’s opening in the fall of 2019 will coincide with the opening of Shibuya Parco.

Walmart has announced the launch of its first online store in Japan. It has teamed up with local tech giant Rakuten for this purpose. The first e-commerce store titled Walmart Rakuten Ichiba Store has been opened on the Rakuten Ichiba internet shopping mall. The collaboration combines Walmart’s expertise in delivering U.S. branded products and Rakuten’s dominant position in the online market to bring new shopping experiences to customers in Japan.

This digital store follows the strategic alliance between Rakuten and Walmart earlier this year.
Japanese consumers will be able to access a wide variety of high quality U.S. branded products through this online store. The products include outdoor goods, toys, and fashion apparel. There will be around 1,200 products from many prestigious brands available on the store initially.

One of the things Japan is known for is its food, so much so that even their convenience stores are also held in high regard by many where you could quite literally have a multi-course meal of good quality in the store itself, thanks to its wide selection of foods. Lawson’s, one of the chains of convenience stores in the country, is also particularly known for their fried chicken.

These little bite-sized nuggets are cooked in the store itself and are extremely tasty and make for a great snack on the go, but like with most fried foods, they can get a bit stale when they get cold. However that won’t be the case in the future as Lawson’s Japan has debuted Karaage-kun (via SoraNews24), a fried chicken making robot that will be installed at Lawson’s TOC Osaki branch in Tokyo on the 11th of December.

Unreal engine developer Epic Games has revealed that it’s setting up its own online store for selling games. The Epic Games Store will initially be released for titles meant for the PC and Mac but the company has confirmed that the store will be released for Android as well in 2019.

Epic is promising a fairer system for developers whereby they will be able to retain 88 percent of their revenues from the games that they sell on its platform. That’s a significant difference compared to the 30 percent cut that Steam takes from developers.

Sony Mobile Store Europe has opened up pre-orders for the Xperia XZ3. In the UK, the handset will cost £699 with three options available (Black, White Silver, Bordeaux Red). Forest Green is likely to be exclusive to a carrier in the UK. Sony has flagged the expected release date as 5 October 2018.

A report earlier this week seemed to suggest that Epic's Fortnite Battle Royale for Android could actually be launched outside the Google Play Store. For the most part all apps are typically launched via the Play Store for a variety of reasons, such as security, reassurances that it won't be malware (for the most part), consolidation, ease of updates, and more.

This is a strange move, but a move that has since been confirmed. In an email to The Verge, Epic's CEO Tim Sweeney said, "Epic wants to have a direct relationship with our customers on all platforms where that's possible. The great thing about the Internet and the digital revolution is that this is possible, now that physical storefronts and middlemen distributors are no longer required."

We know that Fortnite will be making its way onto Android this summer, but Epic has been somewhat mum on when and how they are planning on doing that. This has since led to rumors and speculation about its release, where we have heard that the game could actually launch as a Samsung Galaxy Note 9 exclusive for a month.

Now according to the latest speculation, it seems that Fortnite might skip launching on the Google Play Store entirely. This is actually a big deal since pretty much all Android apps launch via the Play Store, but a report from XDA has found some code on Epic's website that seem to be a set of instructions for Android users on how to download and install the app that seems to bypass going through the Play Store.

Due to licensing, copyright, and maybe censorship issues, not all apps are available worldwide. This means that while some users can access certain apps, others living in another part of the world can't. This has led to smartphone users coming up with unofficial ways of circumventing these restrictions.

However the good news is that for Android users, it looks like Google will be easing up on those restrictions and allowing some Android users to shop in a different country's Play Store. This means that for some, they will be able to make purchases in a Play Store different from the one that they are using, although note that this comes with a caveat.