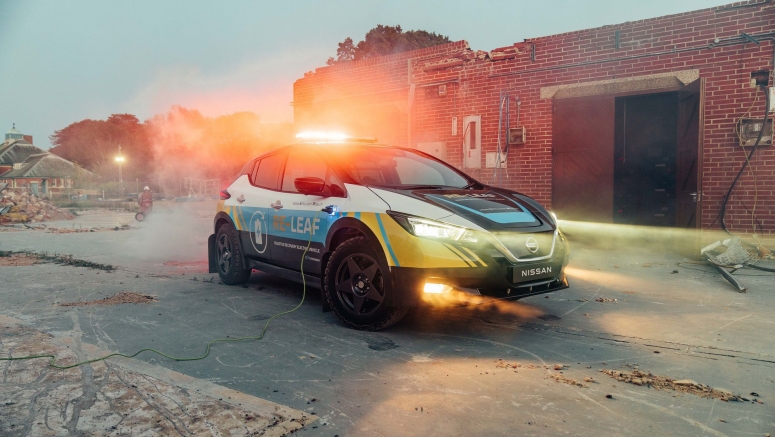 Nissan put a Leaf on stilts to show how electric cars can help emergency response workers in the field. Cleverly called Re-Leaf, its latest concept was developed to deliver electricity where and when it's most needed.

Made by British race car builder RJN Motorsport, the design study is based on the Leaf Plus, which benefits from a bigger and more usable battery than the standard model. Normally, the 62-kilowatt-hour lithium-ion battery pack simply zaps the front wheels into motion. In the Re-Leaf, it can also dispense electricity via three sockets. Two are on the outside of the hatchback, under weatherproof covers, and the third is integrated into the trunk.

Nissan notes a fully-charged battery pack can power the average European household for up to six days; there's no word on how long an American household can live off of it. For example, a 230-volt, 2.6-gallon soup kettle uses 9.6 kilowatt-hours of electricity when it's plugged in for 24 hours. Running an electric jack hammer for a full day requires approximately 36 kilowatt-hours, while a 100-watt flood light consumers 2.4. In theory, the Re-Leaf can power these devices simultaneously for a day and still have enough juice left in its pack to drive home.