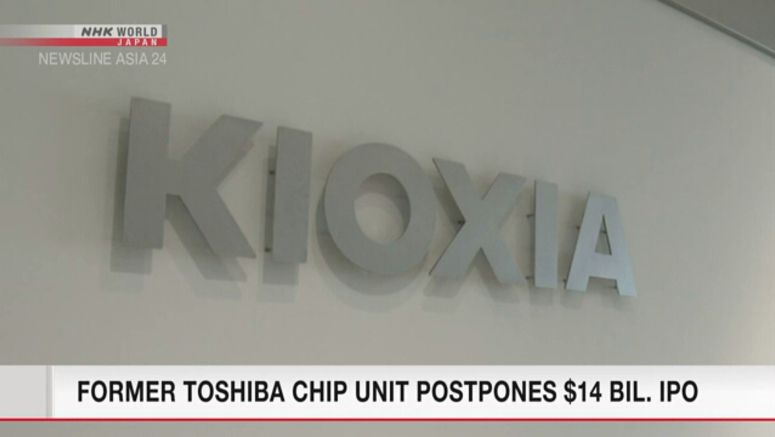 Major Japanese memory-chip maker, Kioxia Holdings, has shelved its plans to go public next week, amid growing uncertainty surrounding its business. The escalating tussle between Washington and Beijing over tech firms was behind the move.

The company is a spin-off of electronics giant Toshiba's memory chip business. Its board made the decision on Monday.

There are many laptop makers in the market today, but it looks like we can now take Toshiba off that list as the company has quietly announced that they are exiting the laptop business. The company has revealed that they have since transferred all of their remaining stake in its personal computing business over to Sharp.

Toshiba’s exit shouldn’t really come as a surprise if you have been following the news. Back in 2018, the company had actually sold 80.1% of its personal computer business to Sharp, and now it looks like Sharp will pretty much own all of it while Toshiba will stop selling laptops completely.

One of Japan's biggest electronics manufacturers and the country's most prestigious university are joining hands in the field of artificial intelligence. Toshiba and the University of Tokyo will be establishing a program aimed at producing more AI experts.

Sources say researchers from the university will teach "deep learning" and other aspects of AI to Toshiba employees using big data from the company's factories.

Toshiba announced plans on Tuesday for an alliance of more than 100 firms and organizations that will develop Internet of Things services.

Major companies such as Softbank and Kyocera, start-up firms and universities are among those expected to join the ifLink Open Community.

Toshiba has unveiled what it claims is the first ever Conventional Magnetic Recording (CMR) Hard Drive (HDD) with a massive 14TB capacity. This drive, which is billed as a model for enterprise use, boasts nine disks and a helium-sealed design, 3.5in form factor, 7200rpm speed, and a 6Gbit/s SATA interface.

Toshiba announced the new drive, which is part of the new MG07ACA series, last week alongside a smaller 12TB 8-disk model. Both hard drives boast a lower operating power profile than the previously launched MG06ACA series, according to Toshiba, as well as better storage density.

Toshiba just announced that a deal has been reached to sell a part of its company responsible for making flash memory chips to a consortium of companies that include Bain Capital and Apple.

It’s no secret that Apple is getting its memory chips from Samsung, and the fact that only Samsung can provide a large enough quantity puts it in a very strong position. This is where the Toshiba transaction becomes really important, not just because of the huge sum of money involved, but because it changes who things work in the market.

The AL14SX Series is available in 300GB, 600GB and 900GB capacities. The 900GBmodel offers a 50% increase in maximum capacity from the 600GB of the predecessor AL13SX Series. The 4Kn and 512e models also delivers an approximately 19% increase in sustained data rate, pushing it to 290MiB/s and an approximately 28.7% improvement in power efficiency (W/GB). Sample shipments start today.

Toshiba will supply a 100kW Pure Hydrogen Fuel Cell System to Tokyo-based chemical company- Showa Denko. Hydrogen to fuel the system will be extracted from recycled used plastics by Showa Denko, and the fuel cell will help to meet the energy needs of a new Tokyu REI hotel under construction in Kawasaki, Kanagawa prefecture. Hot water cogenerated with the electricity will also be utilized in the hotel, which is scheduled to open in spring 2018.

Toshiba Corp. has taken back a majority stake in a joint chip production venture with Western Digital Corp. from its chip unit which the Japanese conglomerate plans to sell off, after the U.S. company took legal action last month to block the sale, sources close to the matter said Wednesday.

Toshiba retook the 50.1 percent stake in the joint venture that it transferred to Toshiba Memory Corp. after it was spun off from the parent company. Western Digital owns the remainder.

Toshiba Corp exhibited a prototyped compact PV inverter to be attached to the back side of a solar panel at PV Expo 2017, which took place from March 1 to 3, 2017.

Toshiba Corp's shareholders endorsed Thursday its arrangement to turn off its prized memory chip unit to support its money related remaining, as they barbecued organization administrators about the chapter 11 documenting by its U.S. atomic unit Westinghouse Electric Co.

"I profoundly apologize for all the bother we have brought about our stakeholders," Toshiba President Satoshi Tsunakawa said at an uncommon shareholders' meeting held in Chiba to look for endorsement for the spinoff of Toshiba's prized chip business.

Toshiba Corp. will once again push back the release of its financial results after missing the initial deadline a month ago to probe a potential auditing problem at its U.S. nuclear unit Westinghouse Electric Co., sources close to the matter said Monday.

Toshiba today announced the latest addition to its SCiB line-up of innovative lithium-ion rechargeable batteries, the SIP series of modules for automated guided vehicles (AGV) and other types of industrial equipment. AGV are mobile robots widely used in transportation of materials and components around factory floors and warehouses, and also in settings that include hospitals and offices. Typical AGV use lead batteries that suffer from long charge times and short lifecycles; Toshiba’s SIP series modules offer a much more cost-efficient solution.SIP series modules integrate a battery management unit that manages voltage and internal temperature, facilitating easy replacement of lead storage batteries.