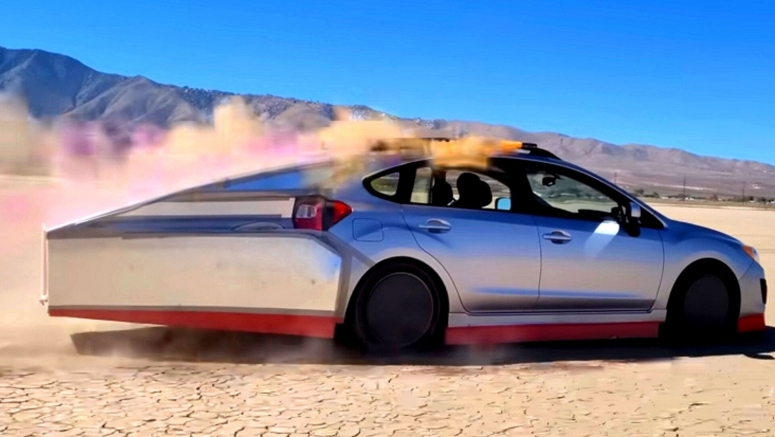 A little over a month ago, we featured a video that asked how much more aerodynamic a Subaru Impreza could be made with a trip to the hardware store. Not fully satisfied with the answer in that video, the channel has posted another, with version 2.0 upgrades.

In his first video on the subject, the host of the YouTube Think Flight channel wondered if he could make his car 20 percent more efficient with foam, tape, and a little bit of knowledge of aerodynamic principles. The results were, frankly, pretty impressive.

Without using any fancy equipment, the channel’s host was able to make his run-of-mill hatchback use 13.7 percent less fuel by making it more teardrop shaped and, in doing so, showed why the makers of EVs like the Aptera and the Mercedes EQXX are working to bring that shape back onto the road.

More: How Much More Aerodynamic Can You Make Your Car With A Trip To The Home Improvement Store?

Despite his initial success, though, the host wanted more. Like a modern-day Icarus, with airfoils rather than wings, he wanted to get closer to his goal of improving fuel efficiency by 20 percent.

Fortunately, his first test gave him some ideas. So he opted to add a front lip and side skirts, in order to direct the air around the car rather than under it. This, he explains, was done because trying to flatten out the bottom of his car was beyond his means. In so doing, he managed to increase his efficiency over stock by a little more than eight percent.

This was a meaningful success, and so he also reworked the extended rear section in order to encourage the air to flow over it more smoothly. This is where he started flying too close to the sun, as it were.

Although driving the car on a fixed-length loop seemed to suggest that the car was 17.9 percent more efficient with both the body kit and the extended rear section, his results later proved to be somewhat muddled.

In another test, he decided to remove the side skirts in order to test how his new extended tail compared to his old one. His test suggested that the new tail alone was just 7.9 percent more efficient than stock, much less than his old tail. And yet, testing with smoke grenades and telltales suggested that the air moving over the car was much smoother.

“This makes me question whether or not basing fuel burn on how reliably the gas pump fills the gas tank to the same point each time is a good method,” he admits. “Perhaps there are other reasons for these results.”

And while the results may be less clear-cut at the end of this video than we might perhaps have hoped, it remains an excellent demonstration of a number of aerodynamic concepts. It’s also an demonstration of why automakers and race teams have to spend so much money designing their cars.