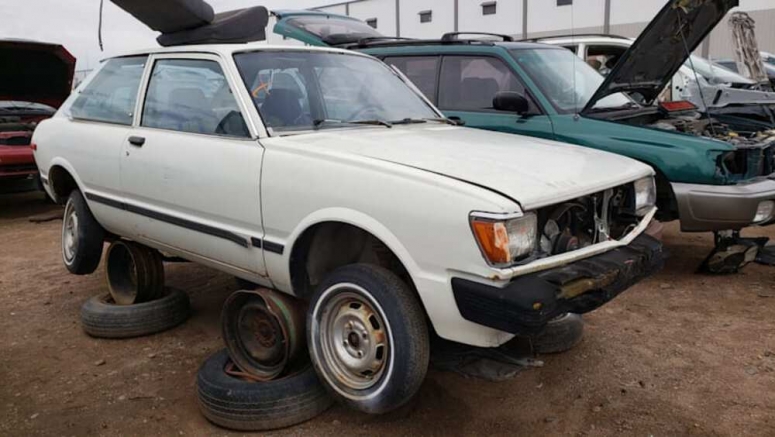 The original Tercel was the first Toyota sold in North America with front-wheel-drive, with the first-generation cars available here for the 1980 through 1982 model years. Initially badged as Corolla Tercels, in order to cash in on the name recognition established by the bulletproof Corollas sold here during the 1970s (more recently, Toyota did the same thing by calling the Aqua the Prius C over here), these cars had tiny price tags and little need for fuel. Unfortunately, the Rust Monster saw the first-gen Tercels as tasty appetizers and consumed most of these cars decades ago. Here's an '81 hatch that beat the odds and came close to the magical 300,000-mile mark during its 40-year career, now residing in a self-service yard between Denver and Cheyenne.

These cars were bare-bones econoboxes even by the lenient standards of the early 1980s, but the mechanical stuff held together very well. This one averaged just over 7,200 miles for each of its 40 years on the road.

With just 81 horsepower from its 3A-C engine, the 1981 Tercel struggled on short highway on-ramps but got great fuel economy— a real plus in the dark days after the 1979 Oil Crisis. The primitive, rear-wheel-drive Starlet beat it in the fuel-economy department in 1981 and 1982, but the Tercel was roomier and quicker.

This car has an interesting collection of bumper stickers, including ones for Christian ska bands the O.C. Supertones and the Insyderz. I wonder if anyone in those bands drove a Vauxhall Cresta.

Corrosion of these stamped-and-welded hollow rear control arms caused a series of notorious recalls during the 1980s, but the ones on this car look non-frightening. Most Colorado Front Range regions haven't used road salt for many decades, and the dry climate here helps keep rust at bay.

The four-wheel-drive Tercel wagons went on sale here starting in the 1983 model year, but Toyota USA still bragged about the off-road prowess of the front-wheel-drive versions.

Literally leaps over the competition!