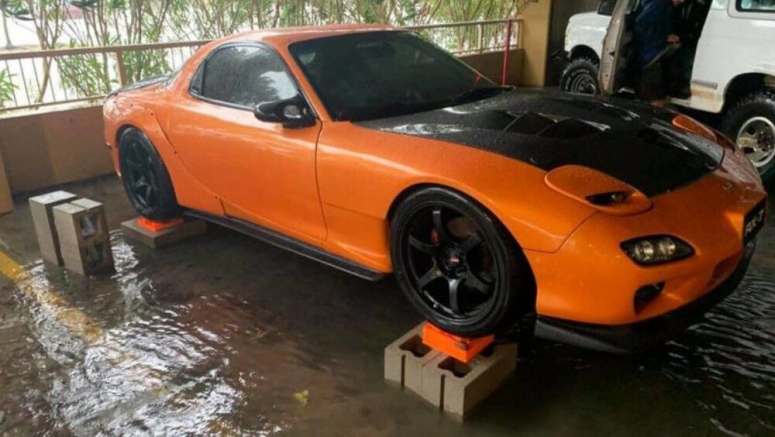 With Tropical Storm Cristobal charting a path for the Gulf Coast, a Biloxi, Mississippi, local named Khuong Nguyen wanted to get his FD-series Mazda RX-7 out of the storm — the coupe had some bad seals that would let in rain. He parked the orange and black coupe in the bottom story of a parking garage at the city's Golden Nugget Casino, which kept the rain from getting in. But Cristobal came on stronger than expected, creating a new threat of water from below when the parking garage began to flood. Austin Owens, a Gulfport resident about 10 miles from Biloxi, saw photos of the RX-7 with water up to its rockers on a local Cars and Coffee page. As he would later tell Jalopnik, the RX-7 being one of Owens' dream cars, he decided he needed to rescue it. Just to make sure we're all on the same page, a young man braved a tropical storm in his own vehicle to save a stranger's RX-7 in another city.

Owens dragooned a friend and hopped in a Ford Bronco, dodging closed roads and fording three or four feet of water on open roads. They drove to Home Depot to pick up cinder blocks, then headed to the Golden Nugget parking garage. As Owens and his friend arrived, they met Nguyen and a couple of his friends pulling Nguyen's second car, a Ferrari 360, out of the garage on a trailer. The RX-7 had already been set on wood blocks, thin bricks, and some orange wheel chocks, but the stilt job wasn't high enough in front; the water in parts of the garage was knee deep. Owens jacked up the RX-7 to get the cinder blocks under the front wheels; the rear end was fine, due to the slope of the garage floor. Success. As one of Nguyen's friends told Jalopnik, Owens' actions "did give us adequate time to combat the rising water."

The success came at a cost, though, Owens reporting, "We actually killed the [Bronco’s] transmission on the way out. We actually had to drive in second gear all the way home" due to floodwater seeping into the transmission.

He has no regrets, explaining his derring-do with, "It’s a rare car ... I would hope somebody would do the same for me if I was in the situation with a car of that stature. I didn’t have it in my heart to leave it there." With the story blowing up on Facebook, he told the legion of enthusiasts sending their respects, "Appreciate the love, but I’d expect the same for one of my cars," followed by, "Alright, who’s down for some Forza?"

Save for the original seal issue, the RX-7 came out of the storm with no issues. When Cristobal's rains abate and the RX-7 is fixed, we're sure Owens wouldn't mind if Nguyen made a trip the other way to take the young man for a spin. Check out the Jalopnik piece for the full story and more photos.