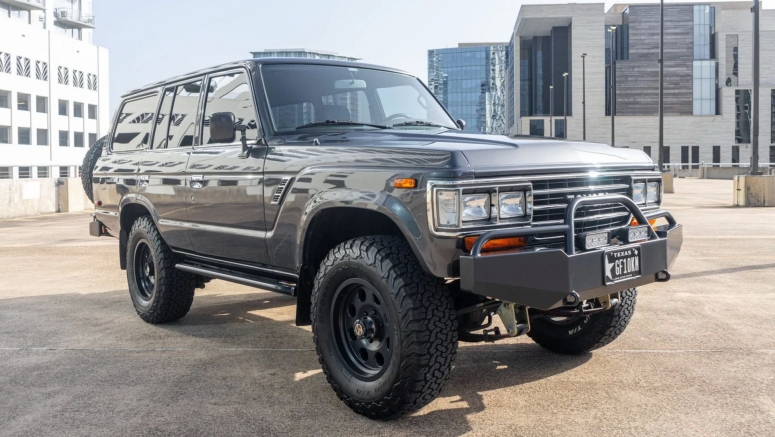 While this is by no means a low-mileage vehicle, we’re pretty sure somebody is going to pay a lot of money to put such a well-kept and heavily customized FJ62 Toyota Land Cruiser in their garage.

Exterior mods include the removal of the drip rails, window surrounds and rocker trim. The Japanese SUV was then repainted Nissan Gray, and equipped with an ARB front bumper, Hella headlights, tinted windows, a Kaymar rear bumper with hitch receiver, plus a rear mount for two fuel cans.

The wheels meanwhile measure 17-inches in diameter and are wrapped with 33-inch BFGoodrich All-Terrain T/A tires, while a full-size spare is mounted on the rear door.

Perhaps even more interesting is the interior, which features black leather front and rear seats sourced from a BMW 5-Series. According to the vehicle’s Bring a Trailer ad, the floors and roof were both lined with Dynamat sound-deadening material before the installation of the marine-grade carpeting was completed.

Other mods include the Line-X coating applied to the cargo floor, wheel arches and the folding rear seatback, while a removable rubber mat protects the entire area.

As for the power department, this Land Cruiser received a 4.8-liter Vortec V8 engine in 2011, mated to a four-speed automatic gearbox and a dual-range transfer case. Also new is the 38-gallon fuel tank, zerk grease fittings and the re-plated factory hardware.