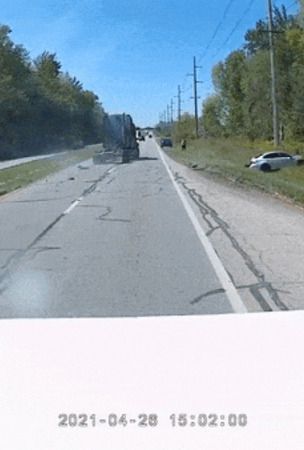 Dashcam footage has captured the moment the driver of a Nissan Altima was rear-ended by a semi-truck in Louisville, Kentucky in late April.

The video was filmed from another semi-truck and shows the trucker slowing down in the right-hand lane as a dog can be seen running across the opposite side of the street and on the grass median. A silver Altima then comes into view traveling in the fast lane and as the dog runs directly towards the Nissan, the driver slams on their brakes. Unfortunately for them, a semi-truck was traveling directly behind them and slammed into the rear of the Altima.

The force of this impact sends the Nissan careening off the road and into a grassy ditch while the driver of the truck can be seen pulling over further up the road. At the same time, the owner of the dog can be seen running after it along the side of the road.

The driver of the semi-truck appears to be responsible for rear-ending the Altima. Obviously, they didn’t expect the car to brake so hard and almost come to a stop, but that’s clearly no excuse as drivers must always stay alert and be ready for anything – and that includes the vehicle in front slowing down for whatever reason. In any case, we can only hope that everyone involved in the crash walked away unharmed.