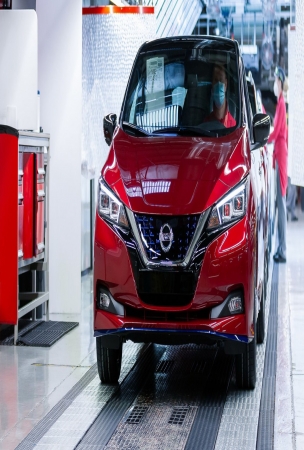 Nissan has delivered the 500,000th example of the Leaf to its owner in Norway in celebration of World EV Day.

Nissan’s production milestone took place almost a decade after the original Leaf first went on sale, at the company’s factory in Sunderland, UK. The British factory has produced more than 175,000 Leaf models since production began there in 2013.

The bigger battery variant of the Nissan Leaf also features a more powerful 214 HP electric motor, over the base model’s 148 HP, and it’s compatible with fast-charging. The 62 kWh battery pack is also 25 percent more energy-dense than the standard pack but it also makes the car heavier by 331 lbs (150 kg).

Nissan’s next chapter in the EV world will be the 2022 Ariya, a fully electric SUV that will be offered in four different variants and the choice between a 65 kWh and a 90 kWh battery pack. The upcoming Nissan Ariya will offer a driving range of up to 379 miles (610 km).