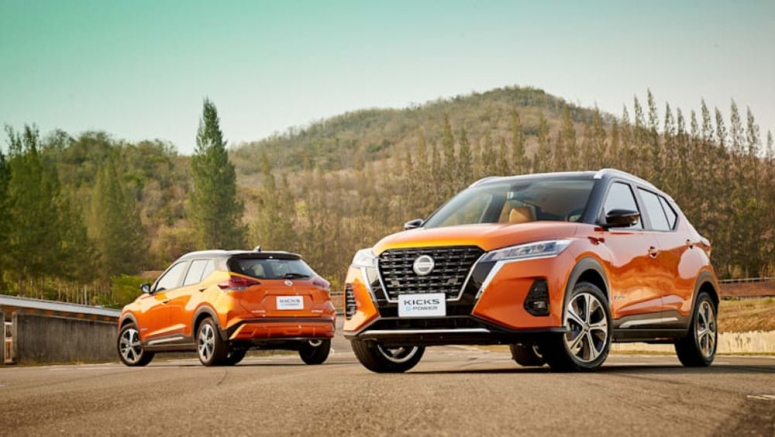 Nissan is launching an all-new version of the Kicks crossover in Thailand that features the brand's e-Power series hybrid setup. And while that powertrain setup is unlikely to make it to the states, the subcompact utility's new styling cues probably herald what's in store for the model that first debuted here in 2018 as a replacement for the polarizing Juke.

Let's focus on e-Power first anyway, because it's interesting technology, even if it's been around for a while. In the Kicks, it's comprised of a 1.2-liter, 12-valve three-cylinder engine that sends power to the electric-drive system; essentially, it's an EV you can't plug in that generates power for the battery from gasoline. There's also a 1.57 kilowatt-hour lithium-ion battery, and electric motor, generator and inverter, which offer up a maximum 95 kW (127 horsepower) of power and 191 pound-feet of torque. The system allows the ability to route power to the electric motor from both the battery and the engine when it's needed, like climbing a hill or passing on the freeway.

As intriguing and fuel-efficient as the technology is, it likely wouldn’t offer much of a compelling alternative to U.S. buyers already considering the Kicks on sale here, which offers 122 hp and 114 lb-ft of torque, plus 33 mpg combined, from its 1.6-liter four-cylinder engine. We’ll hold out hope Nissan sees fit to pair it with a higher-powered setup further down the line.

The Kicks e-Power also features the same one-pedal technology found in the Nissan Leaf that can be used to maintain spacing between cars, decelerate and come to a stop. Thailand becomes the first market outside Nissan’s native Japan to build the e-Power.

Sharper styling is where the new model foreshadows what we'll probably see here in the U.S. Up front, there’s a larger V-motion grille, with the surround now integrated with the LED headlights, which look narrower, and the lower bumper is sporting a redesign. The roof is now blacked out along with all the support pillars, adding to an exaggerated floating appearance.

Inside, there’s a new 7-inch instrument cluster and 8-inch Nissan Connect infotainment touchscreen with Apple CarPlay, with a two-tone black and orange interior available on the top-of-the-line VL model. It comes in six exterior color options four trim grades, compared to the three on offer in the states.