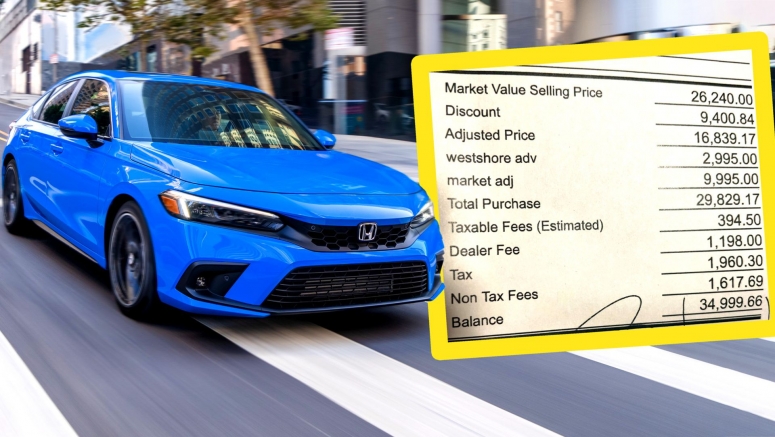 We’ve told you about a number of audacious dealer markups and add-on fees in the past. The power of the internet allows the common person to rise up and call out dealers for such greedy practices. And that’s exactly what’s going on right now over on Reddit where one user is trying to wrap their head around a convoluted, roughly $3.6k markup – and that’s not including any suspicious and totally arbitrary dealer fees worth a few thousand dollars extra, listed on an everyday Honda Civic hatchback that has a $26,240 MSRP.

On it we see a bunch of red flags. Instead of starting with Honda’s MSRP (Manufacturer’s Suggested Retail Price), the top line lists the MVSP (Market Value Selling Price). Guess which one of those is an arbitrary number that the dealer gets to decide on. Next, we see a discount of $9,400.84 which is frankly surprising and fantastic frankly. Of course, it’s followed up just three lines down by a $9,995 market adjustment.

More: Nissan Dealer Lashes Out Defending Z’s $130,000 Price, Asks "Why Should This Car Have No Markup?"

So the dealer offers a discount only to then charge roughly $600 more than that discount. On top of all that, there’s a $2,995 “Westshore Adv” line which seems to be the dealer’s suite of random services that many customers don’t want or even care about like “Nitrogen Tire Service”, and “Anti-Theft VIN Etching.”

According to the original poster, he’s negotiated a few of these fees down so that the total price has dropped from what was originally $45k. Currently, he’s about to be on the hook for $34,999. He’s evidently been told that some fees like the Westshore Advantage Plan are non-negotiable.

Those unreasonable negotiating tactics and greedy extra fees have the comment section rolling. “Greedy Dealerships worlds taking advantage of people in an economic downturn,” read one comment. “If you bought this you’re a borderline idiot. you’ll be stuck in a huge loss for years to come,” said another.

The original poster got some helpful advice too though. One comment read “Don’t be afraid to travel to buy a car either. I find it hilarious that people won’t buy a $400 airline ticket to fly a few states way to save $5000+. Makes zero sense.” Another one had a personal experience to share “Thats very similar to the best price I was quoted on a Civic in Tampa. I was able to do much better on a Corolla, I would have preferred Civic but Corolla was a much better deal once markups we’re considered.”

There are a number of important lessons here. Firstly, ask advice from other knowledgeable car people before you buy. Secondly, be willing to look outside of your local area because good dealers (which we’re told do exist) will sell you the car you want at a reasonable price. Then you can have it delivered or take a one way flight, train ride or bus ride to go pick up your new car before driving it home.

We’re not sure exactly how this saga will end but we can assure you that this poster seems intent on buying THIS Honda Civic even if it costs him thousands in the long run. One commenter might have summed it up best. “$35,000 for a civic LOL you’re the reason we have runaway inflation.”