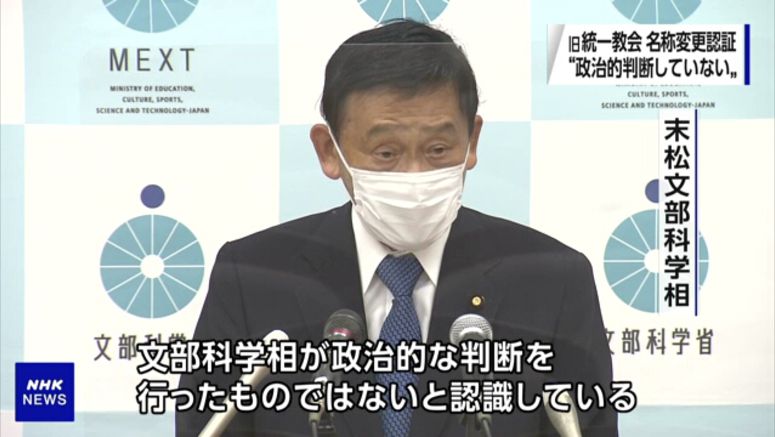 A Japanese Cabinet minister has denied that politics played any role in a decision by the government to certify the then-Unification Church's name change in 2015.

The suspect in the shooting reportedly believed Abe was close to the group, now known as the Family Federation for World Peace and Unification. He blamed it for the breakdown of his family.

Critics have charged that the Cultural Affairs Agency's approval of the religious group's name change resulted in more people falling victim to its marketing schemes and coercive donation drives.

The group reportedly consulted the agency about a possible name change in 1997. But it didn't submit its filing until 2015, when Shimomura Hakubun was the education minister.

Suematsu said he doesn't know why the group waited until 2015 to file an application.

The education minister acknowledged that Shimomura was informed before the application was received and before it was approved. But he said these unusual steps were taken because the religious group was subject to high public attention.

He said he has confirmed with an agency official in charge at the time that Shimomura issued no instructions in the matter.

A number of politicians and Cabinet ministers have denied having close ties with the religious group since the shooting of Abe.

He said the telegrams were sent automatically in response to requests. He added that this would never happen again.

Kobayashi said he wasn't aware of problems associated with the group when he sent those messages and delivered a speech at a related event in his local constituency.

He said he has no intention of forging ties with the religious organization.