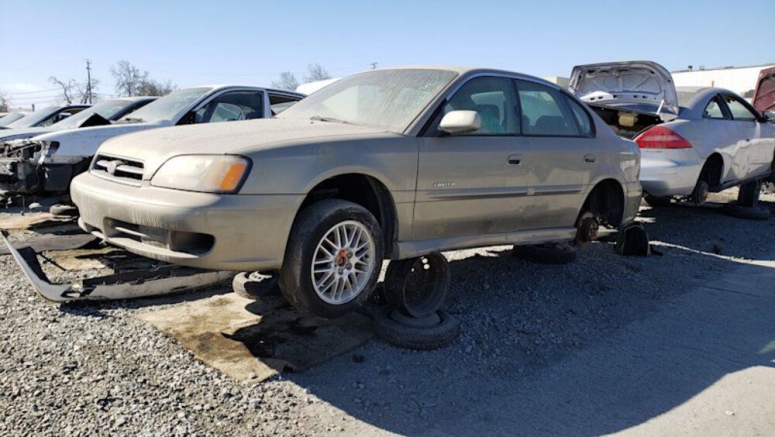 Due to the runaway success of the Subaru Outback wagon based on the third-generation Legacy, which appeared in North America for the 2000 model year, nearly all of the discarded 2000-2004 Subarus I find in my local Denver junkyards are these dime-a-dozen longroofs, mostly with H4 engines and automatic transmissions (though I do manage to run across the occasional rare H6 model). For a discarded example of the super-rare non-Outback Legacy GT sedan with manual transmission, I had to travel all the way to a Northern California car graveyard. Here it is!

Legacy Overland has completed work on another classic Toyota Land Cruiser, unveiling this beautifully restored and upgraded FJ40 model from 1977.

The new generation Subaru Legacy was unveiled at the beginning of the year. With a very restrained exterior makeover, bigger boot and overhauled cabin, it wants to lure you away from rivals like the Mazda6, Honda Accord, Toyota Camry and Nissan Altima.

OJAI, Calif. — No brand has benefited more from the crossover boom than Subaru. Subaru's spectacular rise – from fewer than 100,000 sales in 1995, to a record pace of roughly 700,000 this year – was fueled largely by all-wheel-drive crossovers like the Outback and Forester, as the American market basically fell into Subaru's lap. But unlike some competitors, Subaru is keeping full faith in sedans, as evidenced by the all-new 2020 Legacy. Its impressive redesign underlines the advantages of the humble family sedan, from a more-affordable price to superior fuel economy. In true Subaru fashion, or perhaps anti-fashion, the Legacy's self-effacing styling  that's hard to distinguish from its predecessor won't blow anyone away. But look past the workaday sheetmetal, and you'll find a decisively improved sedan. It's roomier than any class rival save the Accord, notably quiet and lavishly appointed, too. Consider the standard Eyesight suite of accident avoidance tech and a driver-monitoring system that's still AWOL on most luxury cars, including Teslas. And the 2020 Legacy is a solid value, at $23,645 to start. That undercuts the most-affordable Accord by nearly $1,000, and the Camry by $1,120 – and that's despite the Legacy's standard, full-time all-wheel drive, which has few peers in this segment. The 2020 Nissan Altima S AWD starts well north of the base Legacy, at $26,345, and although it's slightly more powerful than the Subaru, it's not enough to justify the premium. So if you buy a Legacy, it's like getting AWD for free, if you'd care to look at it that way. (Subaru certainly would).

In this "Top Gear" clip, host Chris Harris and "TG" magazine deputy editor Jack Rix share their thoughts about the new Toyota Supra. Jack Rix puts Harris on the defensive right away by asking him to explain a line he wrote in a previous review of the car: "This is one of the strangest cars I've ever driven." Harris initially seems to admit that his perspective may be unique to someone who tests cars so frequently, then explains that what he meant is that he's very used to individual brands and expects certain things from them. "... When I get into an Audi, there's a smell to an Audi, there's a feeling to the seats, there's a feeling to the steering wheel." But when he got behind the wheel of a Supra, it just didn't feel like a Toyota. The two discuss the history of Japanese sports cars and what Harris thinks of the Supra's segment overall. To get the full scoop, you'll have to watch the clip above and don't forget that "Top Gear" airs on BBC America Sundays at 8 p.m. ET.

Subaru has launched the production of the new 2020 Legacy and Outback models at its Indiana factory in the U.S.

Every now and then, the defects of a new car are so serious that they cannot be fixed. Subaru knows this all too well as, last year, a bunch of Ascents were recalled and, instead of being repaired, owners were given a brand new one.

Subaru has announced pricing for the redesigned 2020 Legacy and Outback.

Pricing for the 2020 Subaru Legacy sedan and Outback crossover are now available. Both models were completely redesigned for the model year, but base prices have barely gone up. The 2020 Subaru Legacy starts at $23,645, just $215 more than the old model. The 2020 Subaru Outback now starts at $27,655, which is $335 more than the 2019 Outback. Price differences vary depending on trims, but for the 2.5-liter 4-cylinder models, the prices have only gone up a few hundred dollars. You can see the breakdown of Legacy prices below, and the Outback prices below the next paragraph. As for the turbocharged models, the price increase is quite a bit more compared with equivalent 3.6R 6-cylinder examples from 2019. The cheapest turbocharged Legacy is $35,095, which is $2,665 more than its flat-six predecessor. With the Outback, you can technically get a turbo model for less than the cheapest 2019 six-cylinder model. It starts at $35,905, whereas the entry-level 6-cylinder Outback for 2019 started at $35,970. But keeping trims matched up, the same trim turbo model is $38,755, an increase of $2,785. Regardless of Legacy or Outback trim, buyers will get more power and torque. The base 2.5-liter inline-4 makes 182 horsepower and 176 pound-feet of torque, up from 175 and 174, respectively. The turbo engine makes 260 horsepower versus 256 from the old 6-cylinder, and 277 pound-feet of torque instead of 247. Both vehicles are completely redesigned boasting lighter, stiffer chassis and a much nicer interior with a massive center touchscreen available. Be sure to check out our first look articles on the Outback and Legacy for additional details on the new cars.

The Outback is Subaru's best-selling vehicle, and for good reason. It's capable, it's versatile, it wears inoffensive looks, and it offers plenty of modern tech in a relatively affordable package. So when it came time to rework the model and introduce a new generation, Subaru took the less-is-more approach to the aesthetic redesign, which only has subtle tweaks. The major changes come inside the cabin and beneath the sheetmetal by introducing a more premium interior, and an all-new XT trim with a new 277-lb-ft 2.4-liter turbocharged boxer engine.

Similar to the approach used to update the 2020 Legacy, Subaru refined the Outback at every level. That started with the car's bones and the Subaru Global Platform. Subaru says the 2020 Outback is 70 percent stiffer in torsional and front-suspension rigidity and 100 percent stiffer in front lateral flex and rear subframe rigidity. The improved structure is also said to be 40 percent more absorbent in front and side crashes.

Subaru will unveil its all-new 2020 Outback crossover at the New York International Auto Show on April 17th, next Wednesday.

Pass by these the latest two generations of the Subaru Legacy sedan on the street and you could be forgiven for thinking that they’re the same vehicles.

A new Subaru Outback is in the works and according to Car and Driver, it will receive many of the new features found in the 2020 Legacy unveiled at the Chicago Auto Show.

Subaru has unveiled its all-new 2020 Legacy at this year’s Chicago Auto Show, hoping to challenge the likes of the Toyota Camry, Honda Accord and Mazda6 with a car that’s technically superior to its predecessor.

Japanese health authorities say more than 80 people have been confirmed to be infected with the coronavirus on Sunday so far, bringing Japan's total to over 1,800.A low pressure system and a cold air mass brought unseasonal snow to Tokyo on Sunday.

As the coronavirus continues to spread, the governor of Saitama Prefecture has called on people to avoid going to Tokyo for non-essential purposes.At a press conference on Sunday, Motohiro Ono said he is concerned about a further increase in the number of infections.

Japan has reported 200 coronavirus infection cases in a day for the first time.Tokyo confirmed a record 63 cases on Saturday. Neighboring Chiba Prefecture also reported more than 60 cases. That figure includes 57 cases connected to a facility for people with disabilities.

The Japanese government plans to quickly draw up an emergency stimulus package to cope with the economic impact of the coronavirus pandemic.The package will include cash handouts to struggling households and will be on a larger scale than similar measures taken during the 2008 global financial...more

Foreign residents in Japan's Kanagawa Prefecture near Tokyo are turning to a medical facility offering service in six languages for help amid the coronavirus outbreak.Staff at the Kobayashi International Clinic in Yamato City can respond to patients in six languages, including English, Korean and...more

Non-Japanese speakers who want advice on the new coronavirus can call hotlines run by the Japan Tourism Agency and some local governments.The agency offers consultation services in English, Chinese, and Korean for 24 hours every day. The number is 050-3816-2787.