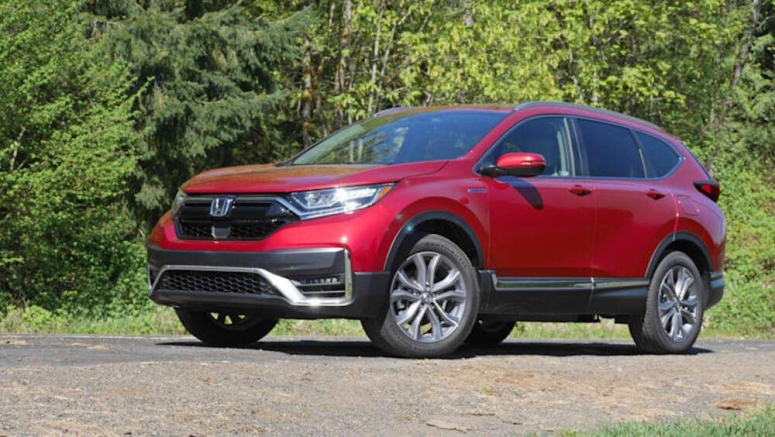 The marriage seems so right you wonder what took so long. Honda's hybrid powertrain is excellent and the CR-V is its best-selling model, yet the 2020 Honda CR-V Hybrid is only just arriving in dealers now. That's four years after this current CR-V generation was introduced, three years after the hybrid powertrain debuted in the Accord, two years after it was applied to the Insight (which is basically a Civic Hybrid) and five years since the first-generation Toyota RAV4 Hybrid was introduced.

The current RAV4 Hybrid is now Toyota's best-selling hybrid, and it would be shocking if this new CR-V Hybrid doesn't do the same trick for Honda. The powertrain is available on every trim level, effectively an option commanding a $1,225 premium over a comparable all-wheel-drive CR-V. That's impressively reasonable given its fuel economy advantage, added performance, agreeable drivability and lack of practical drawbacks.

Sales of Honda's 2020 Accord Hybrid are about to start and the automaker has released official pricing details and fuel economy ratings ahead of tomorrow’s launch.

The 2020 Honda Civic Si is getting an update that comes with fresher styling and more safety features. It also gets a shorter final drive gear ratio to help its 205 horsepower and 192 pound-feet of torque deliver quicker acceleration. Unfortunately, the change also appears to have sacrificed fuel economy. The EPA just released the numbers on the new Civic Si, and fuel economy has dropped by 2 mpg in all driving scenarios for 26 in the city, 36 on the highway and 30 combined. The reason for the drop is likely because the shorter final gear ratio means the engine will be running at higher rpm for any given speed, and thus be using more fuel at any given speed. Despite the dip in fuel economy, the Civic Si is still about the most efficient sporty compact with a manual (the Si's only transmission) on the market. Among similarly priced and powered small cars, the Fiat 500 Abarth ties the Civic's combined fuel economy of 30 mpg, but with better city fuel economy at 28 and worse highway mileage at 33. The Veloster Turbo with a manual gets 29 mpg combined followed by the Jetta GLI at 28, the GTI at 27, and the Mini Cooper S at 26.

Toyota’s all-new 2020 Highlander SUV has landed at the 2019 New York Auto Show, showcasing a chiseled new design that borrows styling cues from the smaller RAV4, new tech and a more efficient hybrid system. The gasoline-powered 2020 Highlander will arrive in Toyota dealerships in December, while the Hybrid in February 2020.

Toyota’s all-new 2020 Highlander SUV has landed at the 2019 New York Auto Show, showcasing a chiseled new design that borrows styling cues from the smaller RAV4, new tech and a more efficient hybrid system. The gasoline-powered 2020 Highlander will arrive in Toyota dealerships in December, while the Hybrid in February 2020.

No one is going to buy the 2020 Toyota Supra based on its fuel efficiency numbers, but they are important to know and the EPA has just released them.

Nissan announced the pricing details of the 2018 Rogue Hybrid, which is now on sale at dealers in West, Northwest, Mountain and Mid-Atlantic regions of the US market.

Honda already showed us what the new Insight hybrid would look like with its barely disguised "concept" at Detroit. Now Honda is showing the production model, and on the outside, it looks identical to the concept except for the lack of tinting on the lights and windows. The production car also reveals its interior, and Honda has finally provided the details on its chassis and powertrain.

Unsurprisingly, considering the Insight's size, the car is based on the Civic platform. It features MacPherson struts up front and a multi-link rear suspension. It will also be assembled at Honda's factory in Indiana where the Civic and CR-V are built. Besides different styling, the Insight also features an aluminum hood, as well as extra sound insulation in the engine bay, fenders, firewall and floor not found on the Civic.

It has been nearly five months since we drove an early pre-production version of the 2018 Honda Accord Hybrid and now we’re finally learning its fuel economy figures.

The Honda Civic Type R has officially had its fuel economy rated in the U.S.

The car, which is powered by a 2.0-liter turbocharged four-cylinder engine making 316 horsepower, will return 22 mpg in the city, 28 on the highway for a combined 25 mpg. All Civic Type R models will exclusively be front-wheel drive and use a six-speed manual transmission.

The LC 500h cross breed roadster will convey 35 MPG on the interstate as per the Lexus USA site :

The 8GR-FXS 3.5L motor is matched with the new Multi-Stage Hybrid framework , conveying a 16 pull help and an extra 1 MPG change over the past era half and half framework utilized as a part of the GS 450h.