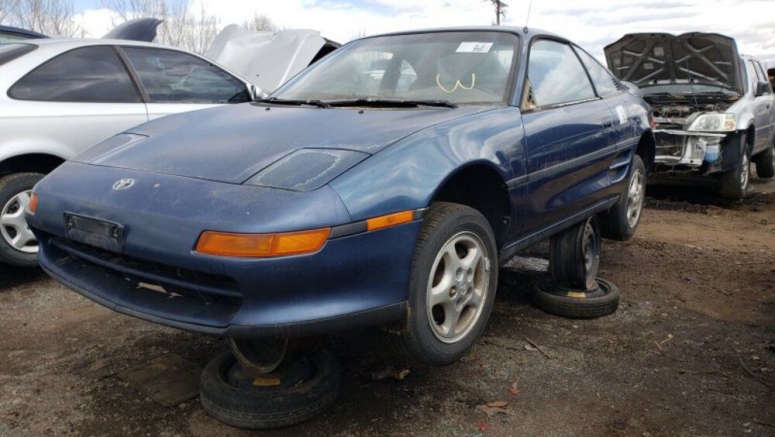 During the middle to late 1980s, American car shoppers looking for an economical-yet-sporty two-seater for non-oligarch money had plenty of interesting choices. From Detroit, they could choose a Ford EXP/Mercury LN7 or a Pontiac Fiero. From Europe, Malcolm Bricklin made the Pininfarina-badged Fiat 124 Sport Spider and Bertone-badged Fiat X-1/9 available over here (the Alfa Romeo Spider sold for Corvette money, so we're not including it here), while ships crossed the Pacific carrying Honda CRXs and Toyota MR2s. The latter car, with its light weight and mid-engined design, developed a cult following during its first generation (1985 through 1990 model years in North America) but didn't seem to make as vivid an impression after the second generation debuted for 1991. I've documented first- and third-generation MR2s for this series, and now I've found a good second-gen example in Denver.

Could Toyota follow up the recent launch of the 2020 Supra with the resurrection of yet another iconic sports car from its stable?

Toyota recently resurrected the Supra and now it appears the company could do the same to the MR2.

The Lamborghini Veneno Roadster is one of the most gnarly looking road cars ever designed and unsurprisingly, it has inspired many body shops around the world to create equally as insane knockoffs.

By looking at these pictures, it's hard to imagine that anyone could have walked away from the Toyota MR2 wreck. However, not only did the driver manage to free himself from the pile of twisted metal, but he actually left the wreckage unharmed, apart from a few scratches and bruises.

During my junkyard journeys, I see Toyota MR2s here and there, mostly of the first-generation 1985-1989 type. The final iteration of the MR2 was sold in North America for the 2000 through 2005 model years; sales never matched those of the earlier cars and the few that still exist seem prized by their owners for track-day duties, so I don't see many in wrecking yards. Here's a 2002 model in a Northern California self-service yard.

2002 was the first model year for the five-speed sequential manual transmission in the MR2, and this car has one. Up until that time, those insisting on SMT shifting had to buy a costly exotic.

As one of the first affordable mid-engined sports cars, the Toyota MR2 has gained a cult following all over the world.

The third generation Toyota MR2’s front end already kind of reminded people of Porsche, thanks to those large bulging headlights and how they mesh with the front wings and the hood.

Discovery Channel’s MythBusters Jr. has come under fire from car enthusiasts after the show crushed an old Toyota MR2 during one of its stunts.

With the all-new Supra about to be unveiled in a few weeks, and the 86 starting to show its age, Toyota definitely has its hands full right now.

More than 11 years ago, Toyota pulled the plug on the MR2, a mid-engined, rear-wheel drive roadster that was being sold in the United States, Europe and Japan.

The Toyota Supra is continuing its slow march to production and a new report is suggesting it could eventually be joined by a new Celica or MR2.

Few mainstream Japanese sports cars are as desirable and evocative as the Toyota MR2 Turbo, particularly in its second generation. You can therefore imagine our amazement when we stumbled upon the story of a Reddit user purchasing a mint and barely driven 1993 MR2 that was sitting at a garage for just $500.

The 1990s were a good time for Toyota sports cars, as the Japanese automaker was making the Supra, MR2, and rally-bred Celica. While the Mazda Miata is the default option when it comes to compact sports cars, one can’t deny that it can become attractive, especially if it’s modified.