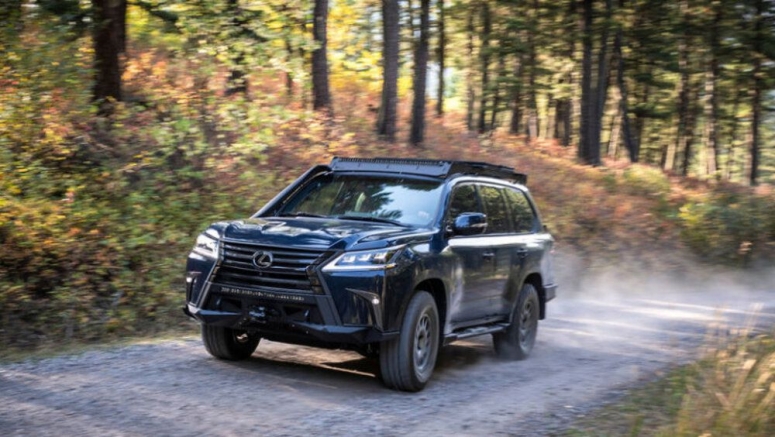 Lexus transformed the LX, its biggest SUV, into a supercharged off-roader that sends chills down the Ford F-150 Raptor's spine. Although it's only a concept, it will attempt to tame the desert during the 2020 Rebelle Rally.

Based on the venerable Toyota Land Cruiser, the LX is a formidable off-roader even without any modifications. Many examples nonetheless end up decked out with aftermarket parts, and it's these go-anywhere rigs that inspired Lexus to create the J201. Its name comes from URJ201, which is the current LX's internal designation.

Stylists started by chipping several slats off the SUV's sizeable spindle-shaped grille to accommodate a winch and a light bar that's safely tucked behind a protective cover. Other aftermarket parts installed on the J201 include a snorkel, a roof rack, running boards, and a metal rear bumper with a pair of swing-out racks that carry extra fuel and a spare tire. Users can access cargo stored on the roof via a ladder installed out back.

When the going gets tough, off-roaders can count on skid plates, a lifted suspension, 17-inch wheels, and 33-inch General Grabber X3 tires to help them soldier on. There's also an onboard air compressor, which lets drivers fill up the tires (after crossing sand dunes, for example) even if they're nowhere near a power outlet.

Lexus pegs the J201's output at 550 horsepower and 550 pound-feet of torque thanks in part to a Magnusson supercharger, but it stopped short of revealing technical specifications. It might have added forced induction to the stock LX 570's 5.7-liter V8, which effortlessly delivers 383 horsepower and 403 pound-feet of torque in its standard configuration, or it might have replaced the eight-cylinder with another engine from its arsenal. Regardless, an automatic transmission channels the cavalry to the four wheels via upgraded differentials.

It doesn't sound like the J201 will ever see the light that awaits at the end of a production line. It's based on a model that sells in extremely limited numbers (4,718 units found a home in 2019), and that's nearing the end of its lifecycle. This concept is not destined to spend the next few decades in a warehouse, however. Rachelle Croft and Taylor Pawley will enter the J201 in the 2020 edition of the Rebelle Rally, which starts this Thursday, October 8. Open exclusively to women, the event will take competitors through 2,000 miles of grueling terrain in California and Nevada.