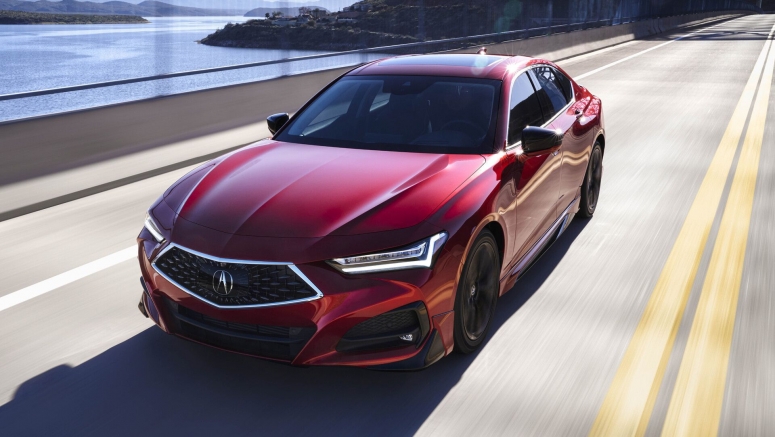 The 2021 Acura TLX has been revealed, and it looks superb. We also have a handful of hard numbers, so you know that we've got to take a look at how they compare to the competition. As we only have numbers for the base turbocharged four-cylinder model, we're only looking at similarly equipped competitors. And with the small to midsize luxury sedan segment burgeoning these days, we've selected a mix of rear-drive, front-drive and all-wheel-drive options to compare to this front-drive-based sedan. You can see the raw numbers below, and a summary of them under that.

The Acura's base engine is a turbocharged 2.0-liter four-cylinder, just like the vast majority of cars in its segment. It's an especially powerful base engine, though, with 272 horses. That tops every base engine in this group, and is only topped by Volvo's mid-range turbocharged and supercharged four-cylinder that makes 316 horsepower. Its torque rating is strong, too, falling short of the aforementioned Volvo engine and the BMW four-cylinder.

You'll note that we've included two four-cylinder engines for the Audi and the Volvo. With the Audi, the entry-level engine is seriously underpowered versus the competition, whereas the higher-output version is more comparable, so we felt it should be included. As for the Volvo, since the turbo and supercharged engine isn't quite comparable to each of these model's six-cylinder alternatives, we felt it should be mentioned, here.

Many of these cars have substantially more powerful alternatives available, including the Acura. The Acura will have a twin-turbo 3.0-liter V6, but we have no specifications for it. It will face off with the 382-horsepower BMW M340i, 400-horsepower Volvo S60 T8 hybrid, 365-horsepower Genesis G70 3.3T and 349-horsepower Audi S4, among others.

The Acura is available with either front-wheel drive or all-wheel drive, and every version gets a 10-speed automatic, giving it claim to the most gears. All the other cars here make do with an eight-speed automatic. The Genesis G70 is the sole offering with a manual transmission, something that's offered on the Sport trim with upgraded brakes and a limited-slip differential. The Audi is unique in making all-wheel drive standard. On the Volvo, all-wheel-drive is only available if you upgrade to the higher-output engine, another reason why we wanted to include it.

On the outside, the Acura is the largest, or more specifically, the longest. It's 4.2 inches longer than the next longest car, the Audi A4. Height and width are extremely close for all these cars across the board. Strangely, though, the Acura also has the smallest wheelbase. Acura hasn't provided any dimensions for head, leg and shoulder room, so we don't know how it will affect interior space, but frequently longer wheelbases can result in more interior room.

We do have cargo volume to look at, though. The BMW is the largest on paper with 17 cubic feet, though we have found it to be less useful than the number implies. The Acura is relatively mid-pack with 13.5 cubic feet, ahead of the Audi's 12 cubes and behind the Volvo's 13.8 cubes with a spare tire. At the bottom is the Genesis G70 with just 10.5 cubic feet.

Pricing hasn't been announced for the Acura, but we have reason to believe it will compare favorably to the competition. The outgoing base model started around $33,000. Since this new car has a new chassis and engine range, we would expect that to rise a bit, possibly to around $35,000. Even if it's a bit higher than that, it will still be a solid choice, as the next cheapest car of this group is the Volvo at $37,045, with a much less potent engine. The Germans are the most expensive, with their base cars hitting the $40,000 mark.