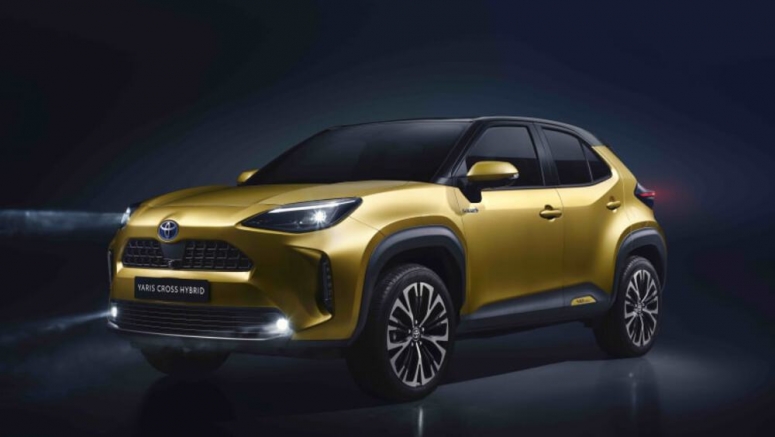 Toyota waited over a month to introduce the pint-sized crossover it planned to unveil at the 2020 edition of the Geneva Motor Show. Called Yaris Cross, the smallest and most affordable member of the company's growing range of high-riding models was primarily developed with the needs of European motorists in mind.

Built on the same basic platform as the newest Yaris, the Cross stretches 164.5 inches long, 69.4 inches wide, and 61.4 inches tall, dimensions that make it approximately seven inches shorter, an inch narrower, and about as high as the C-HR. It's less spacecraft-like thanks in part to a tall, upright front fascia, squared-off wheel arches covered by plastic trim, and a relatively high amount of ground clearance. The fully-loaded model defies its entry-level label with 18-inch alloy wheels, LED lighting on both ends, and two-tone paint.

Outside, there's little to suggest the Yaris Cross rides on the same architecture as the Yaris. It's a different story inside, where the two models share parts like the instrument cluster, the three-spoke steering wheel, and the infotainment system's touchscreen. Here again, small doesn't mean basic and cheap. Big-car features like automatic emergency braking and lane-keeping assist come standard, and moving up the trim hierarchy unlocks niceties like a power-operated hatch. The cabin seats four, though you can squeeze a fifth person on the rear bench if needed, and if you're not worried about getting the silent treatment once you reach your destination.

Buyers will initially have two powertrains to choose from. The entry-level Yaris Cross is fitted with a 1.5-liter three-cylinder whose horsepower and torque outputs haven't been released yet. Toyota focused on the available gasoline-electric hybrid setup, which combines electrified technology found on models like the Camry and the RAV4 with a 1.5-liter triple that runs on the Atkinson cycle. The system sends 116 horsepower to the front wheels in its standard configuration, and motorists can select all-wheel drive at an extra cost.

As much as we'd love to tell you a range-topping model powered by the Yaris GR's 268-horsepower three-cylinder is part of the lineup, there's no indication Toyota will launch a rally-bred, performance-oriented version of its latest crossover. It doesn't sound like a turbodiesel engine will be available, either.

Toyota will manufacture the Yaris Cross in France alongside the Yaris hatchback, which entered its fourth generation in 2019. The model sold in the United States is completely different; it's a re-badged Mazda2. Production is tentatively scheduled to begin in 2021, and pricing will be released closer to its on-sale date. We've asked Toyota if the Yaris Cross will be sold in the United States, and we'll update this story if we learn more. We wouldn't bet on it, though; executives will likely argue it's far too small to get the attention of American motorists.