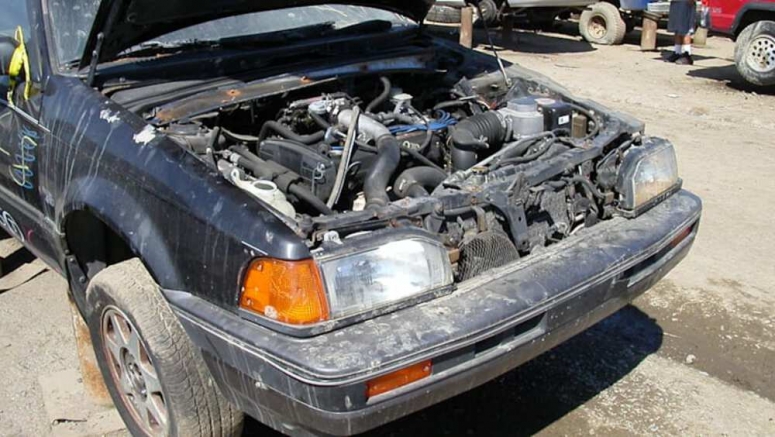 Back in early 2007, when the late Davey G. Johnson got me my first job writing for an automotive publication (well, unless you count writing for the Year One catalogs back in the mid-1990s) and I took on this goofy pen name for real, I didn't quite grasp that any readers might be interested in the stuff I saw during my frequent junkyard trips. So, when I took my crappy Nikon Coolpix 2500 to the now-defunct Pick Your Part in Hayward, California, and saw a super-rare Mazda 323 GTX among all the Tercels and Rabbits in the IMPORTS section, I just took a few shots of this interesting car for my own enjoyment. These days, I'll take more than 100 photographs of a junkyard car of such great historical significance, editing them down to the best couple of dozen, but in March of 2007 I got just three of the 323 GTX. Robert Capa had his Magnificent Eleven at D-Day, and I've got the Magnificent Three of the GTX. Here they are.

Any Mazda 323 of the immediate post-GLC era is a real junkyard rarity today, but Mazda sold very few of the all-wheel-drive, turbocharged homologation-special 323s over here during the 1988 and 1989 model years. A mere 1,243 of these cars made it to North American streets. Back in 2007, they weren't worth much (in fact, they still aren't incredibly valuable, if we go by Bring a Trailer real-world sale prices), and so this one showed up in El Pulpo's yard.

These cars wouldn't be considered particularly fast by 21st-century standards, now that we've had decades of street-legal Mitsubishi Lancer Evos and Subaru WRXs flinging snow and mud around, and they tended to grind their powertrain components into a costly oil-and-metal-shaving slurry. But they were maniacally cool in the late 1980s, and that's enough.

"Even with the sun and heavy rain, I made it here faster with my car!"