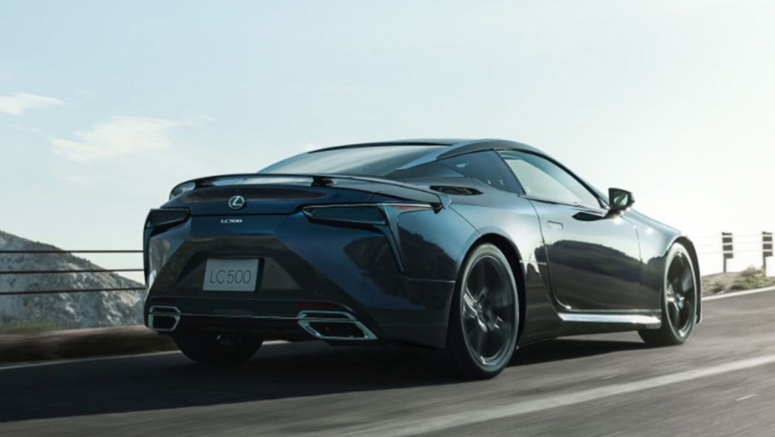 The Lexus LC is one of the most gorgeous vehicles currently on sale and buyers in Japan now have a new variant at their disposal.

Dubbed the Lexus LC Aviation, it is offered in LC 500 and LC 500h forms and is immediately identifiable from regular LC models due to the sleek rear spoiler made from carbon fiber reinforced plastic.

This spoiler has been created by craftsmen involved in the iconic Lexus LFA project and includes downturned winglets that the Japanese car manufacturer says are functional and generate a vertical vortex to smooth out turbulence generated by the car’s flanks. This is said to improve steering response, comfort and stability at high speeds; moreover, aerobatic pilot and winner of the 2017 Red Bull Air Race Championship, Yoshihide Muroya, was involved in its development.

Accompanying the new rear spoiler are 21-inch split-spoke black wheels. Lexus has also blacked out the car’s front spindle grille and side vent moldings, and tinted both the headlights and taillights.

No mechanical modifications have been made. As such, the LC 500 continues to be powered by a 5.0-liter V8 delivering 471 hp, whereas the LC 500h uses a 3.5-liter V6 that works alongside two electric motors to produce a combined 354 hp.

Lexus will build just 70 units of the LC Aviation for the Japanese market, with sales to start on January 6.

Ohtani to both hit and pitch for Team Japan a...

MLB pitcher Darvish to play for Japan in Worl...

Japan ousted by Croatia on penalty kicks in s...

Japan to set up expert panel over possibly to...

Ruling parties aim to agree Japan should have...