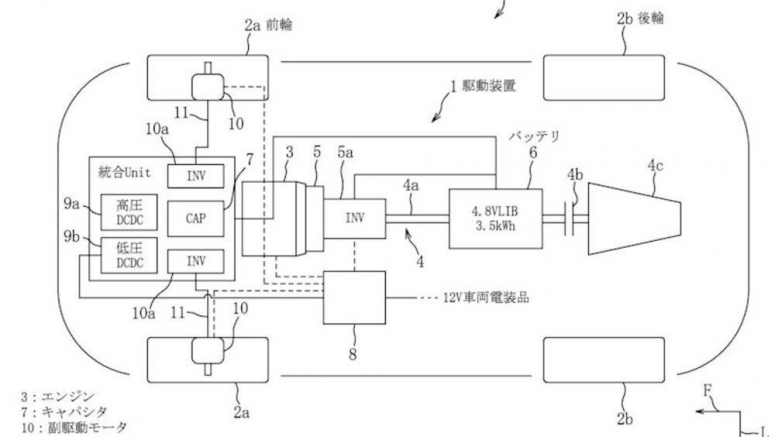 If we were playing alt-powertrain Bingo, a recent Mazda patent application filed in Japan would be one or two letters from victory. What's exciting about the patent, discovered by Japanese outlet T's Media via Motor Trend, is that while it makes a case for an internal combustion engine of any configuration, one of the drawings showing a rotary engine. The wild bit is that the whole powertrain comprises the ICE, a transaxle, two tiny in-wheel electric motors turning the front wheels, a third electric motor in the driveline, a capacitor, a lithium-ion battery, and three inverters. Motor Trend parsed the mechanics, and the way it reads, Doc Brown couldn't have done a better job.

The rotary engine at the front turns the rear wheels, but not directly. Instead of a flywheel on back of the engine, the drawing shows a 25-kW electric motor and an inverter, then a driveshaft running to the transaxle. Along the axis of the transmission tunnel in a normal car, between the inverter and the transaxle, lies a 3.5-kWh battery running at 48 volts. MT writes that the electric motor can add its output to the ICE output to drive the rear wheels, or the e-motor can turn the rear axle on its own.

Up front, two inverters and a double-layer capacitor join the ICE in the engine bay. The capacitor and tiny hub motors in the front wheels run at 120 volts, a higher voltage than the rest of the electrical system, so that the small in-wheel motors can generate the same torque as a larger motor running at a lower voltage.

The AWD system acts on-demand. Given the signal, the capacitors discharge their energy to the wheel motors, and recover energy from braking. When the capacitors are at full charge, they send excess regen energy to the lithium-ion battery; conversely, the battery can recharge the capacitors when they're low and the front hub motors need power. The patent explains that the ICE works with the rear e-motor to drive the rear wheels at low speeds, the front motors called on to "generate an output only when a large output is required in the high vehicle speed range."

The rather complicated system is focused on providing the benefits of a hybrid system and all-wheel drive, but at lower weight than one would expect. A rotary serves due to its compactness, but one of the drawings shows an engine with a V layout. Hub motors get dinged for adding unsprung weight, hence the small motors here. The benefit of capacitors in this application is their lighter weight and superior charge and discharge characteristics when juicing on-demand motors compared to a battery. Keeping those front motors on their own circuit centered around the engine shortens the amount of wiring needed, and allows a small main battery, saving more weight.

All this system needs is fuel cell and a steam boiler and it wins Bingo, which is why we can't imagine seeing this in a production Mazda, but anything's possible. MT had a welcome take on how the design could get real, writing, "But for a halo car like the on-again, off-again Mazda RX-9, developing a three-motor e-AWD rotary hybrid system seems less far-fetched. Besides, it'd be a shame to let a gorgeous design like the RX-Vision concept go to waste."

2021 Nissan Sentra Gets Standard Smartphone I...