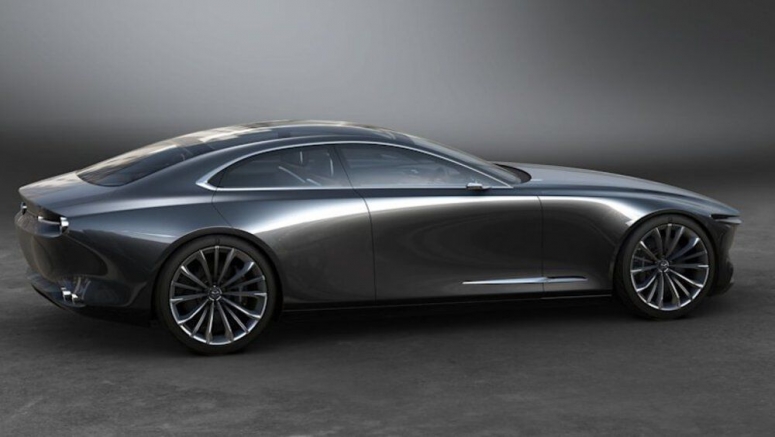 Last June, Japan's Best Car magazine laid out what we considered a whopper series of rumors about future Mazda developments. The mag said it had been speaking to a Toyota source on an unrelated matter, and found out that Mazda's work on a straight-six Skyactiv engine was predicated on that engine's use in Toyota Group vehicles, including Lexus models. Car and Driver has apparently consulted its own sources, and in a new report utters many of the same pronouncements as Best Car. The next-generation Mazda6, due around 2022, will molt out of its transverse engines on a front-driver platform, and be the first home for the longitudinally-mounted straight-six on the automaker's new rear-wheel drive "Large Architecture."

The gas-powered Skyactiv-X six-cylinder, a shade under 3 liters of displacement, will get help from a 48-volt hybrid system, and top output could hit 350 horsepower. A second straight-six will come in an oil-burning Skyactiv-D flavor, and PHEVs are certain to eventually factor into the equations.

The sheetmetal around the bodywork will draw inspiration from the four-door Mazda Vision Coupe concept that debuted at the 2017 Tokyo Motor Show. Describing a scenario we can only cross our fingers for, C/D writes "there's a chance Mazda will mimic Lexus and put inline-six into both four- and two-door bodies," grabbing another unused concept as a design guide for the latter, the two-door RX Vision concept from the 2015 Tokyo Motor Show.

C/D suspects the increasing cooperation between Mazda and Toyota will not only pay the bills for Mazda's sports sedan, but compel the Large Architecture to take a couple of side jobs in Toyota City. C/D writes, "Toyota may adopt the six-cylinder Skyactiv-X for the next-generation Lexus IS and RC." According to the recently leaked dealer report, the next-gen IS could be with us in 2021 as a 2022MY offering. Betting money seems to be on the sedan sticking with Toyota's TNGA platform and Lexus engines until a brand new model shows around 2026, though. The current Lexus RC has been on sale since 2014, and has the best chance of inducting the Mazda architecture and engine into the Lexus fold, joined by a third Lexus to use the platform and split the $30,000 MSRP difference between the RC and flagship LC.

Car and Driver characterizes Mazda's machinations with, "Mazda plans to adopt the blueprint of a full luxury model and hang a lower price on it." Put that way, Mazda would become a Japanese version of Hyundai with ZoomZoom and KODO Soul of Motion design language. If that's how it comes to pass, with Toyota's backing putting Mazda's seriously gorgeous designs on the road, we thoroughly fine with that. Before all this happens, though, we'll stick with our present, overdue hope that Mazda will get its Skyactiv-D here for the current Mazda6.