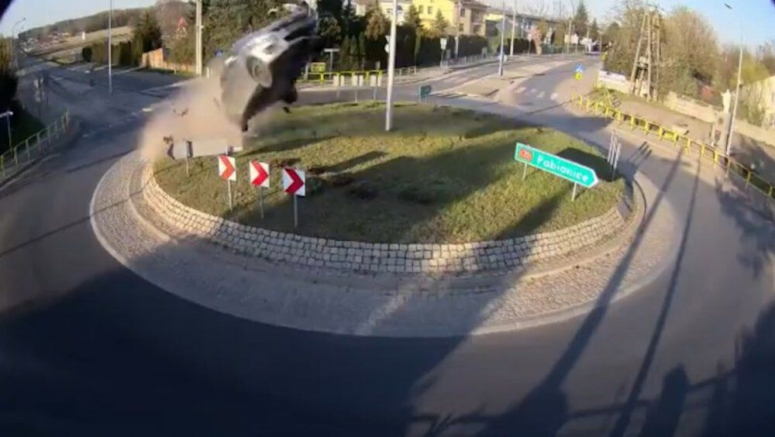 In rural Poland, an unidentified motorist celebrated Easter by launching a third-generation Suzuki Swift off a roundabout and into a building owned by a church. The jump was captured by a security camera.

Polish news site Remiza published the 20-second video on its official Twitter account. The resolution is on par with what you'd expect from a security camera, but we can clearly see the gray, four-door Swift approaching the roundabout way too fast about eight seconds into the clip. The driver seemingly tried to make an evasive maneuver, but it was too little, too late. He went straight where the road didn't.

He hit the stone embankment, which was luckily sloped rather than perpendicular to the road, and it pelted the Suzuki into the air at an angle we thought was only possible in Grand Theft Auto. He snapped a tree in half, allowing the local fire department to calculate he got about 23 feet off the ground, and flew for 209 feet until he hit a building that's part of a church. It was sturdy enough to end his impromptu flight.

Suzuki didn't design the Swift to fly, so its landing was about as rough as it sounds. First responders used the Jaws of Life to cut open the hatchback and extract the 41-year-old driver. Remiza wrote police officers said the man smelled like alcohol, though the results of his breathalyzer test haven't been published. He was hospitalized, and the mangled, cut-up Swift was hauled away to the nearest junkyard. No one else was injured.