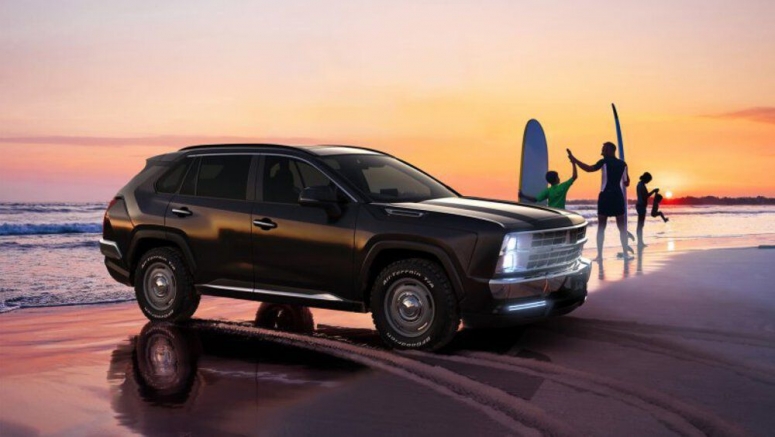 Vintage trucks and SUVs, as well as their follow-ups, are in hot demand right now, and crossovers rule the world's sales charts. So few will be surprised to learn that Mitsuoka's quirky Buddy is sold out until 2023. Unveiled in November 2020, it blends styling cues reminiscent of 40-year old Chevrolet models with the efficiency and reliability expected from a new Toyota.

It's not entirely popularity that led to the Buddy selling out. Mitsuoka has never dabbled in volume, and the Buddy is no exception. It will only build 50 units of the Buddy in 2021, according to Motor1, and it will manufacture 150 more in 2022. There's no word yet on how many it will make in 2023. These numbers would be a rounding error if we were talking about the standard RAV4 (about 448,000 units were sold in America alone in 2019), but the Buddy is much more than a Toyota crossover with extra bling.

Stylists forged an improbable visual link between Toyota's hot-selling people-mover and your grandpa's farm truck by adding a shiny grille, two-piece rectangular headlights, and boxier sheet metal ahead of the windshield. Toyota genes seep through the Buddy's middle section, but the rear end receives vertical lights – which are puzzlingly Cadillac-like – a hatch shaped like a truck's tailgate and more chrome. Dog dish hubcaps are available, too.

Pricing for the Buddy starts at 4,697,000 yen for the non-electrified model and 5,899,300 yen for the hybrid, figures that represent approximately $45,000 and $56,500, respectively. It's about $19,000 more expensive than a base RAV4 on the Japanese market. With this in mind, selling 200 units in a matter of days is an impressive feat. We'll need to admire it from afar, however, because nothing suggests it's America-bound. As a trade-off, there are still thousands of real 1980s Blazers and Suburbans waiting for a new lease on life across the nation.

Birthplace of Toyota vehicles to open to publ...