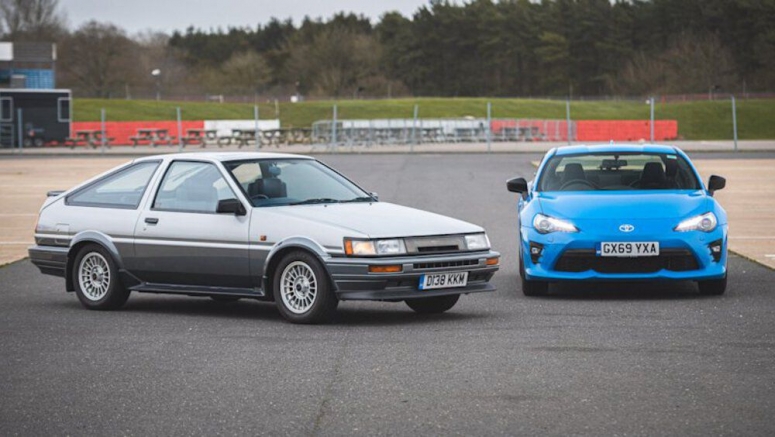 SILVERSTONE, England – Not so long ago the Toyota range seemed like a sea of beige. Then came the 86. Sure, Toyota was chasing Le Mans glory, there was World Rally Championship heritage and Lexus was doing some cool stuff, but the 86 is where things began to turn around. There's even a TRD-tuned Camry now.

But diehards never lost faith, hanging onto their beloved old Celicas, Supras and MR2s to tune and customize. That's readily apparent going by the turn-out for the Toyota Parallel Pomeroy Trophy. Californians can chuckle at the idea of car meets being conducted under anything other than blue skies but, here in the U.K., enthusiasts are a tougher bunch and events go ahead even in 50-mph winds and horizontal rain. No matter what you're driving.

The Rugby World Cup trophy has been brought to the summit of Japan's highest peak, Mt. Fuji, ahead of the tournament that begins in the country next month.

The Webb Ellis Cup arrived in Japan in June and has been on a nationwide tour that includes the 12 cities where the World Cup matches will be played.

The trophy for this year's Rugby World Cup in Japan is beginning a three-month tour across the country.

A departure ceremony for the tour was held in Tokyo on Wednesday, 100 days before the competition opens on September 20.

US President Donald Trump presented "The United States President's Cup" trophy to the winner of the Summer Grand Sumo Tournament in Tokyo on Sunday.

Trump, the first state guest of the new Reiwa era, had earlier played golf with Prime Minister Shinzo Abe and professional golfer Isao Aoki at a course in Chiba Prefecture, east of Tokyo.

Almost exactly two years after the 2017 Honda Civic Type R set a new front-wheel-drive production car record at the Nürburgring Nordschleife, it lost it. The new record holder is the Renault Megane R.S. Trophy-R with a time of 7 minutes 40.1 seconds. That's 3.7 seconds faster than the Civic on the roughly 13-mile racetrack. You can see the record lap, which was set on April 5, above.

As for the record-setting Renault, it's based on the Renault Megane R.S. Trophy and uses the same turbocharged 1.8-liter inline-four making 295 horsepower and 310 pound-feet of torque. Where it differs is in weight savings and improved suspension. Exact details aren't available on the chassis upgrades, but the Trophy-R weighs about 287 pounds less than the regular Trophy model.

Toyota Gazoo Racing is expanding its European activities with the introduction of a new Trophy Competition for drivers of GT86 rally and race cars.

As America's best-selling car for over 41 years, the Honda Accord has earned its share of trophies. Now, the all-new from the ground up 10th-generation 2018 all-new Accord makes its debut in a creative marketing campaign, "Trophy City," highlighting Honda's mission to push beyond past success in pursuit of even greater achievements.

In the imaginative "Trophy City," metal trophy figures representing human accomplishments in sports, academics, music, science and other endeavors come to life to recognize and encourage those who push the limits and refuse to rest on their laurels.

Yuzuru Hanyu added another gold medal to his growing collection on Saturday, when he won his second straight NHK Trophy title by topping both the men's short and free programs for a combined total of 301.47 points.
Together with Satoko Miyahara, who won the women's silver earlier, Hanyu secured a berth in the Grand Prix Final, where he will be looking to become the first singles skater to win the elite event for four consecutive seasons. The NHK Trophy is the last of six Grand Prix series events from which competitors for the final are chosen.

Nissan will be electrifying the UEFA Champions League Final in Milan this weekend. As the official global automotive sponsor of Europe’s most prestigious football competition, Nissan will supply more than 100 electric vehicles to UEFA and associated sponsors to transport guests and officials during the final weekend.

Japan's Shinji Okazaki lifted a trophy for the first time in his club career after the new Premier League champions Leicester City cruised to a 3-1 win over Everton on Saturday in their final home game of the season.

Following Movistar Yamaha MotoGP securing the 2015 MotoGP Team Title at the 14th round of the 2015 Championship in Aragón, Yamaha has now scored its 37th Manufacturers' title, the 14th in premier class, at the Australian Grand Prix this weekend.

Reigning Olympic champion Yuzuru Hanyu produced a stellar performance in the men's short program to lead Japan into solid standing in second place behind the United States on the first day of the World Team Trophy on Thursday.

Olympic champion Yuzuru Hanyu, still recovering from a recent on-ice accident, had to settle for 5th place at the NHK Trophy on Friday in Osaka.

Japan's Kanako Murakami was third in the women's short program at the NHK Trophy on Friday at Osaka Namihaya Dome, trailing leader Gracie Gold of the United States by 3.78 points.