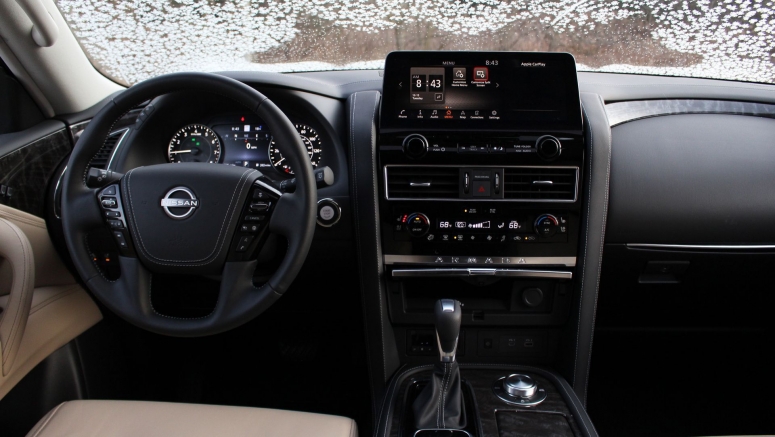 The 2021 Nissan Armada is the first product in the United States to wear the Nissan brand's new badge. It's a modern and sleek-looking logo, and it's well-suited to the properly sorted and genuinely impressive new vehicles Nissan recently launched. The new Altima surprised us in a good way; the redesigned Rogue and Sentra took huge leaps forward, and even the Versa is an impressive little sedan now.

However, the refreshed Armada is only that: a mildly updated version of the same Armada. Since it's the company's flagship SUV, it gets the honor of wearing the new logo first, even if it doesn't best exemplify the sea change happening at Nissan. Although the second-generation Armada debuted four years ago, its bones date back to 2011 when the internationally sold Nissan Patrol and its Infiniti QX56 (later QX80) offshoot debuted. The Patrol would be the basis for this Armada generation, but unfortunately, the updates for 2021 don't add any of the Patrol's extra off-roading equipment that have been missing since the beginning. That includes the locking front and rear differentials, disconnecting sway bar and Hydraulic Body Motion Control suspension that links all four corners of the car hydraulically for better on-road control and less harshness off-road. The only off-road upgrade to speak of for 2021 is a two-degree better approach angle thanks to a reshaped front bumper.

In fact, the mechanicals are largely carryover. Every Armada is powered by a 5.6-liter V8 paired with a seven-speed automatic transmission. Output increases to 400 ponies and 413 pound-feet of torque this year. The 10-horsepower increase is only experienced when running on premium fuel (as in the QX80) — if you drop down to regular grade, you’ll be making the same 390 horsepower as before. Poor fuel economy comes regardless, as the rear-wheel-drive version gets 16 mpg combined, and the four-wheel-drive model achieves 15 mpg combined. We saw 17 mpg in the trip computer on a highway-heavy trip of approximately 100 miles in a four-wheel-drive Platinum model.

Nissan redesigned the grille, headlights, hood, front fenders, rear bumper and taillights. The big SUV looks new from the front and the back, but the side profile is hardly distinguishable from the 2020 Armada. Of all the exterior changes, Nissan’s new LED lighting does the most to bring the Armada into this decade. There’s still too much chrome mussing up some of the finer styling points, but the Armada is definitely better looking than before. And if you really hate the chrome, there’s a Midnight Edition that’ll black everything out.