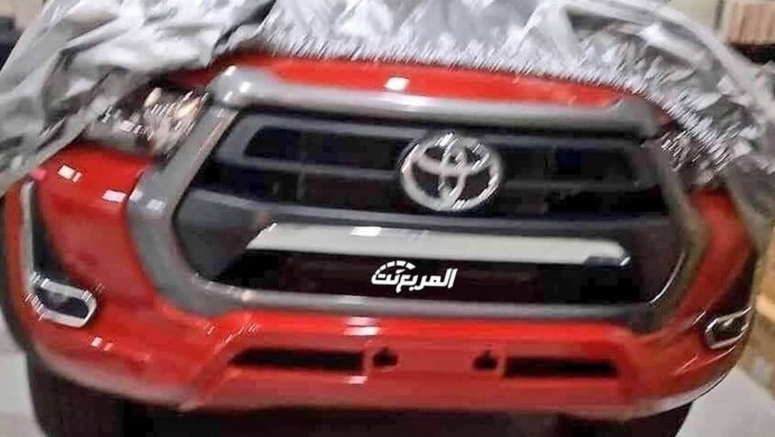 The image reveals the new front end of the pickup truck, which was inspired by the fifth-gen RAV4. It boasts a big grille with horizontal slats, contrast surround and chrome trim positioned under the enlarged Toyota logo.

Watch Also: The Real 'Back To The Future’ Toyota SR5 Used To Be Driven By Mexican Drug Dealers

As you can see in the photo shared by Almuraba, the headlamps have different graphics compared to the current Hilux, and the bumper has new side air intakes and smaller fog lamps, with chrome surrounds. The chrome trim and dark accents in the grille suggest that we are probably looking at the Revo spec. The rest of the body, which is finished in Crimson Spark Red metallic, remains under the cover.

Our Arabic is a bit rusty, but the short caption that accompanies the photo states that the facelifted Hilux will premiere in a few hours in its home market of Japan.

As Toyota officially announced last week ago when it dropped a teaser of the 2021 Hilux (put to the test on a rally stage by Fernando Alonso, as part of the Gazoo Racing’s preparations for the 2020 Dakar Rally),  the vehicle will indeed pack a new engine. It has 2.8 liters in displacement and will be part of the several technical updates, alongside a revised suspension geometry. Alonso said that "the new engine behaves well and the new suspension feels great – even when you push it, the comfort is still there".