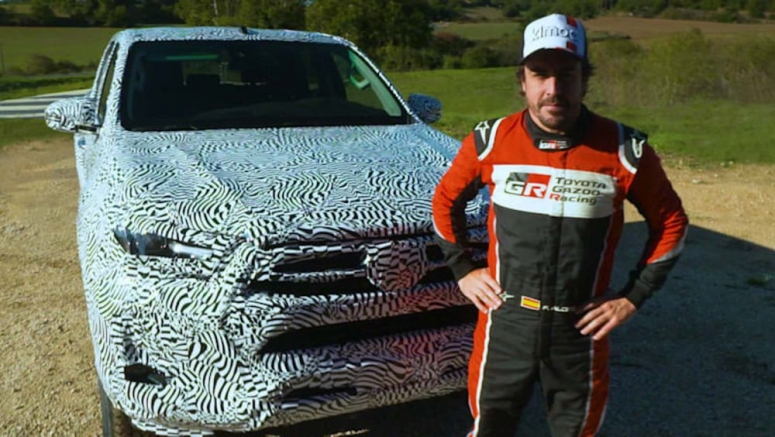 Two-time Formula One champion Fernando Alonso joined Toyota's testing team to put the updated Hilux pickup through its paces. His involvement isn't as random as it seems: He raced a heavily-modified version of the current truck in the 2020 Dakar Rally, and he knows how it should handle when pushed to its limits — and beyond.

Toyota introduced the current-generation Hilux in 2015, so the truck isn't scheduled to retire yet; its predecessor remained in production for 11 years. Instead, the model will receive comprehensive updates including a new 2.8-liter turbodiesel engine, suspension modifications, and an updated front end. Peeking through the camouflage suggests the visual changes include thinner lights and a grille that brings the Hilux in line with recent additions to the Toyota range, like the RAV4. Its lower bumper has gone under the knife, too.

"The new engine behaves amazingly well. It's very powerful. Even if you push the car to the limit, the comfort is still there," Alonso said. He has also won the 24 Hours of Le Mans twice, among other big-name events.

Even with a new engine under its hood, the updated Hilux won't win any races in its standard configuration. Toyota hasn't ruled out a performance-oriented model in the vein of Ford's F-150 Raptor, however, and it could channel lessons learned from the grueling Dakar rally into the model. The rumors outlining a hot-rodded pickup became a little more credible when Toyota trademarked the name GR Hilux in Australia earlier in 2020. GR are the initials the company reserves for its quickest and best-handling models, like the born-again Supra, the rally-bred Yaris, and the upcoming Corolla Hatchback being developed with the American market in mind.

Toyota pledged to release more information about the updated Hilux in the not-too-distant future, so it's reasonable to assume we'll see it in the metal in summer 2020. It will go on sale in dozens of global markets shortly after its unveiling, but the firm isn't planning on selling it in the United States, where the Tacoma and the Tundra will continue to represent it in the lucrative pickup segment.