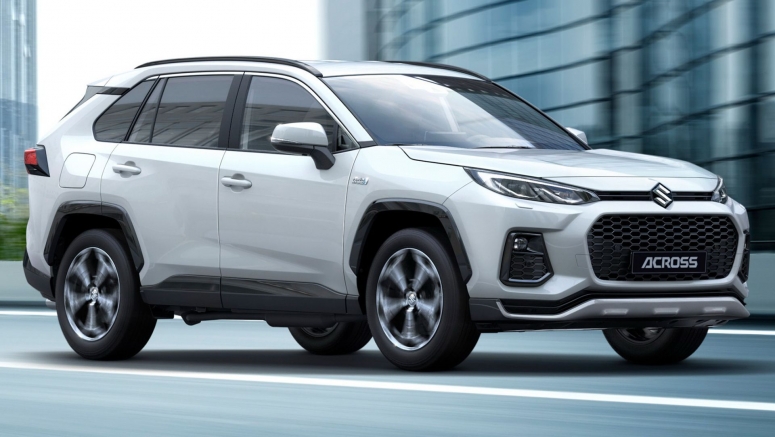 The new Suzuki Across is basically a Toyota RAV4 Plug-In Hybrid with a different front end and some other, barely noticeable, smaller design changes.

The new LED headlights are combined with a large front grille and a set of 19-inch alloy wheels.

The powertrain remains the same, meaning a combination of a 2.5-liter four-cylinder petrol engine with 173 HP with two electric motors and a floor-mounted 18.1 kWh battery pack. The electric motor at the front produces 180 HP while the one at the back makes 54 HP. Suzuki didn’t release a combined output figure, with the powertrain in the RAV4 making 302 HP.

Suzuki claims that the new Across is capable of covering 46 miles (75 km) on EV power alone while CO2 emissions are rated at just 22 g/km on the WLTP cycle. The E-Four electronic all-wheel-drive system can vary the torque distribution front-to-rear from 100:00 to 20:80, thanks to the sophisticated AWD Integrated Management system that also controls the engine throttle, transmission shift scheduling and steering.

The new Suzuki Across also features a Trail mode, which ensures the best possible grip and control on slippery surfaces, imitating a limited-slip differential by applying the brakes and adjusting the throttle to keep the vehicle moving.

The interior layout is unchanged over the Toyota RAV4, with the only difference being the steering wheel design, the instrument panel and of course the badges. The infotainment system uses a 9-inch touchscreen display and comes with Apple CarPlay, Android Auto, and MirrorLink.

Suzuki Across Vs Toyota RAV4

The list of the active safety systems includes pretty much everything, from Pre-Collision System and Lane Tracing Assist to Dynamic Radar Cruise Control and Rear Crossing Traffic Alert.

Suzuki will launch the new Across in the European market in the autumn of this year with prices to be announced at a later date.