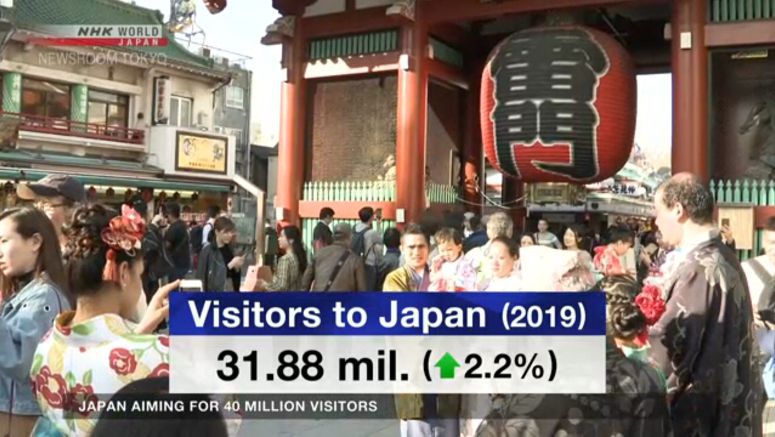 Japan's Chief Cabinet Secretary Yoshihide Suga has reiterated a goal of welcoming 40 million visitors by the end of the year.

Suga addressed a government panel Wednesday at the prime minister's office to promote a tourism strategy.

One of the most powerful storms of the year is forecast to make landfall in Japan on Saturday. Typhoon Hagibis is expected to bring record-breaking rain and winds to the Tokai and Kanto regions, including Tokyo.

The Japan Meteorological Agency says that the large and very strong typhoon is on a northerly path over the Pacific south of the main island of Honshu.

Prime Minister Shinzo Abe described his new Cabinet as one that will offer stability, while new ministers provide the energy needed to take on challenges. In a news conference, he specifically cited imminent issues in foreign relations.

He said, "I asked Mr. Motegi to assume the post of foreign minister. He will continue to take charge of trade negotiations with the United States, which are in the final stage. He led the difficult negotiations on TPP 11 to a conclusion. His solid diplomatic skill is highly evaluated internationally. I want him to further enhance Japan's diplomacy, including more proactive economic diplomacy."

Japanese Prime Minister Shinzo Abe and US President Donald Trump have agreed to seek the conclusion and signing of a trade deal at a bilateral summit next month.

The two leaders met twice for talks in France on Sunday on the sidelines of the Group of Seven summit. It is unusual for the two leaders to meet twice in such a short period of time.

NHK has learned final preparations are ongoing ahead of the upcoming G20 summit to have participating nations jointly aim to reduce new plastic marine waste to zero by 2050.

The summit opens in Osaka, western Japan, on Friday.

With Japan's consumption of green tea in steady decline, a new breed of casual cafe specializing in the traditional brew aims to reverse the trend by introducing customers to a wide variety of brands, as well as unconventional serving methods.

Customers including visitors from overseas and young Japanese are able to learn about green tea and perhaps find a new favorite variety at such cafes.

It's all well and good to show how the benefits of hybrids over pure electric, though I wonder at the reasoning behind taking such a contrary opinion. Range-anxiety is a very real thing, but the technology is only going to get better — in fact, parent company Toyota has accelerated their EV development and plan to have an EV on sale by 2020.

The Sony PlayStation VR’s Aim Controller was initially supposed to be released around the holiday season with the Farpoint FPS game but that didn’t happen. PSVR owners have not been able to get their hands on the controller and the game because both have been delayed. However, they might be able to pick one up over the next couple of months. Farpoint developer Impulse Gear has said that the PSVR Aim Controller release is going to take place in May this year.

Borrowing from the Beaujolais Nouveau tradition in France, six sake breweries here always release a special batch of rice wine to ring in the new year.
But in a special twist on the annual event this year, the sake breweries were seeking to attract foreign visitors.

At the upcoming New Year Grand Sumo Tournament, a wrestler making his juryo-division debut has gained notice not so much for his age, but his birthday.
Newly promoted Terutsuyoshi was born on Awaji Island on Jan. 17, 1995 — the day the island was rocked by the Great Hanshin Earthquake.

Lexus is once again taking aim at plug-in vehicles by emphasizing the perceived challenges of recharging batteries, rather than simply filling up with gas or hydrogen. Only this time, Toyota's luxury division appears to be zigging while everyone else is zagging. Of course, the nameplate can use all the help it can get when it comes to hybrid sales.

Japan, the United States and South Korea on Sunday affirmed closer coordination in the swift drafting of a new U.N. Security Council sanctions resolution on North Korea in response to its fifth and largest nuclear test earlier this month.

Randy Krummenacher (Kawasaki Puccetti Racing) and his four-time championship winning team-mate Kenan Sofuoglu arrive in Thailand for the second round of the FIM Supersport World Championship with the same goal in mind, after very different experiences at the season opener in Australia. Randy won his first ever WSS race by a clear margin but race leader Kenan suffered a blameless crash and no-score after experiencing a tyre issue.

The 2016 J.League season kicks off Saturday with a smattering of teams plotting to knock Sanfrecce Hiroshima off their perch as Japan’s No.1 team.
The Purple Archers claimed their third J1 crown in four seasons last year, holding off Urawa Reds throughout the course of the regular two-stage season, then defeating 2014 champion Gamba Osaka in a thrilling playoff final.

Japan's Prime Minister Shinzo Abe has asked for understanding regarding the government's request to temporarily close schools around the country.He made the remarks in a news conference on Saturday to explain his commitment to containing the spread of the new coronavirus.

Teachers busy ahead of coronavirus breaks

Teachers in Japan are busy preparing for urgent school closures that the government requested across the nation to contain the spread of the new coronavirus.At a primary school in Ayase City, near Tokyo, teachers are working over the weekend to prepare assignments for children to complete over the...more

Japan's Prime Minister Shinzo Abe has asked for understanding for the government's request to shut down schools around the country, and promised financial and other support for parents who are inconvenienced.Abe held a news conference on Saturday to explain his commitment to containing the spread...more

Hamasaki Ayumi's biographical novel 'M Aisubeki Hito ga Ite,' written by Komatsu Narumi, will be adapted into a drama. It will air on TV Asahi ever Saturday beginning in April.'M Aisubeki Hito ga Ite' is a book that traces the singer's encounters and separations before she became the diva know as...more

It's been announced that ANGERME member Oota Haruka will be going on hiatus.Reportedly, Oota violated a Hello! Project rule and admitted to doing so. Up Front Agency decided to "give her some time to reflect and think about what she has done with the awareness that she is a member [of Hello!...more

The Recording Industry Association of Japan (RIAJ) has announced the winners of 'THE 34th JAPAN GOLD DISC AWARD.'