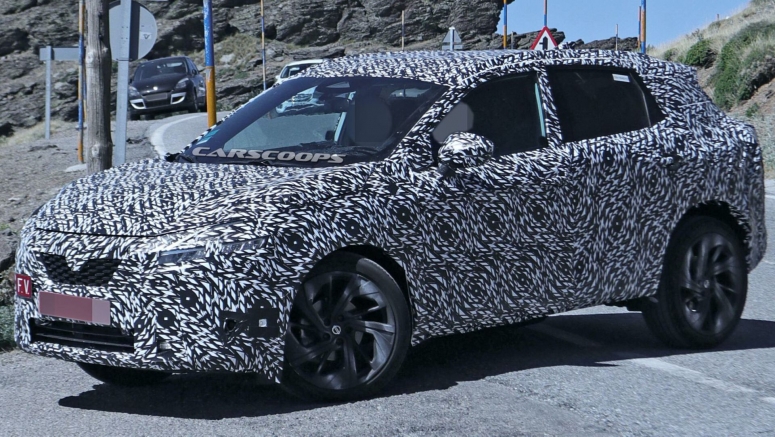 The third-generation 2021 Nissan Qashqai is on the way and today we can bring you the best photos so far of the compact crossover that the U.S. calls the Rogue Sport.

Made in the UK for Europe and Japan for North America, the Qashqai / Rogue Sport is one of Nissan’s most popular vehicles worldwide and one of the best-selling models in its segment. It’s particularly successful in Europe where it has been the brand’s best-seller for many years now.

As a result, it’s critical for Nissan to get the next-generation model right. Judging from these spy shots, it looks like the Japanese carmaker will play it safe with the 2021 Qashqai / Rogue Sport. Think evolution, not revolution.

This particular prototype spied undergoing hot weather testing may be fully wrapped in camouflage but it’s not that hard to see that its proportions are very similar to the outgoing model.

Expected to be around the same size, the new Qashqai / Rogue Sport will adopt Nissan’s latest design language featuring a more angular design as seen on the new Juke. The photos allow us to spot parts of the V-motion grille and sleek headlights, thought it’s too early to say if the latter are of the split variety.

Other interesting details include the big aero-style wheels possibly hinting at a hybrid powertrain, and the sloping roofline that gives it a slightly sportier stance. As for the rear end, it looks familiar enough and appears to sport horizontal taillights.

Under the surface, the all-new Qashqai / Rogue Sport will be based on the latest evolution of the CMF-C/D platform shared with the bigger 2021 Nissan X-Trail / Rogue. Expect turbocharged petrol engines with 48-volt mild-hybrid assistance, an e-Power range-extender EV powertrain, and a plug-in hybrid variant sourced from Mitsubishi. Diesel fans could be in for a disappointment though as reports claim the European Qashqai will no longer offer oil burners.

In contrast with the exterior, the cabin will see a radical redesign with bigger screens for the instrument panel and infotainment system. The latter will be new and feature all the latest gizmos.

Nissan is likely to debut the new Qashqai in late 2020, though an early 2021 unveiling should not be ruled out given the impact of the coronavirus pandemic.