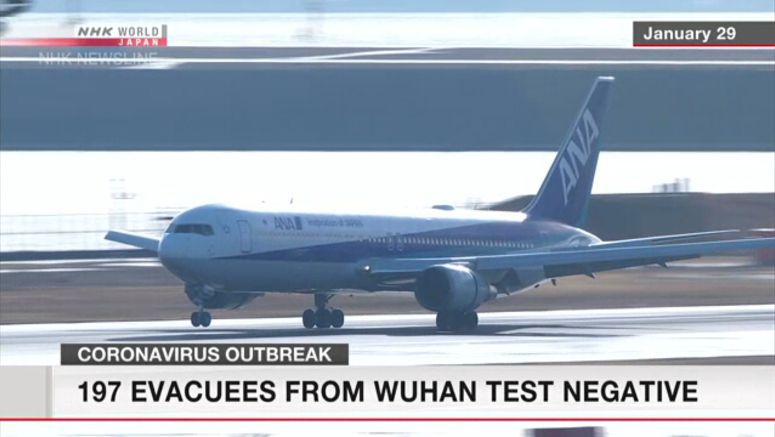 Passengers on the second plane to evacuate Japanese people from Wuhan, the epicenter of the new coronavirus outbreak, who tested negative for the virus can head home now that their quarantine period has ended.

Japan's health ministry says 197 people who have stayed in isolation after returning from Wuhan, China, on the first of the government's chartered flights from the city have tested negative for the new coronavirus.

Two hundred and six people were on the plane that arrived in Japan on January 29. The 197 did not show any symptoms and tested negative when they were first checked.

They spent 12 and a half days -- what is believed to be the maximum incubation period of the virus -- at facilities in Chiba and Saitama prefectures, near Tokyo. That period was designated by the World Health Organization.

They have since been heading home.

Meanwhile, passengers on the second government-chartered plane, who returned to Japan on January 30, have been tested for the virus since Wednesday. The results will be out as early as Thursday. The passengers will be able to go home if they are found to be virus-free.

The 145 people who returned to Japan on the third plane will likewise begin to undergo checks on Thursday.

Preparations are ongoing to have passengers on the fourth such plane, who returned to Japan last Friday, to be checked for the virus on February 20.