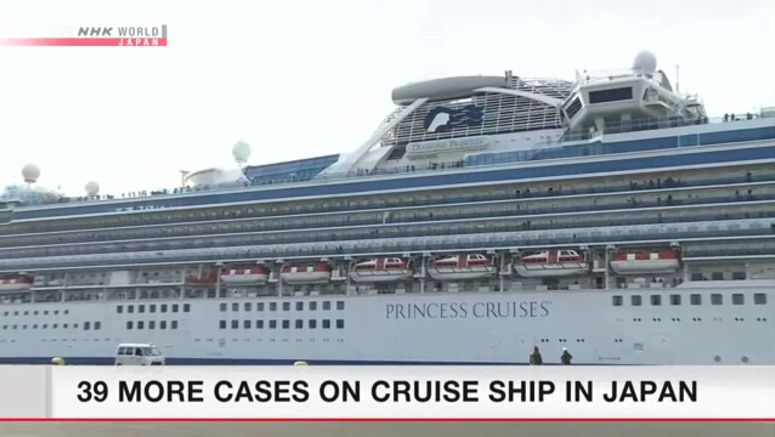 Japan's health ministry says 39 more people on a quarantined cruise ship have tested positive for the new coronavirus. That brings the total number of cases on the vessel to 174.

A quarantine officer from the health ministry has also been infected. The man, who is in his 50s, had been checking body temperatures and collecting questionnaires on the ship early last week.

The ministry says he entered some of the cabins wearing a surgical mask and gloves, in line with WHO guidelines. But he did not have a protective suit or goggles.

The ministry also says five people from the vessel are now in serious condition in hospital.

An expert on infectious diseases is warning that the contagion could be more widespread than initially thought.

Professor Mitsuo Kaku at Tohoku Medical and Pharmaceutical University said, "Some infected people are likely to develop severe symptoms. Medical facilities will have to be prepared for this. In addition to isolation facilities, there will be a need for respirators and dialysis machines, as well as staff who can provide intensive care."

About 3,600 people are still confined to the Diamond Princess. But only 492 have been tested. The health ministry is hoping to marshal enough resources to test everyone on board after a 12-and-a-half day observation period.