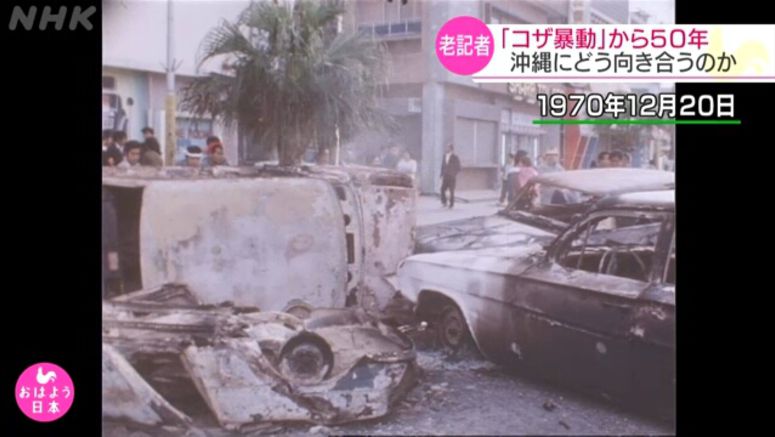 Sunday marks 50 years since unrest which occurred after a car driven by US military personnel hit a local resident near a US base in Okinawa.

The unrest took place on December 20, 1970, two years before reversion of the southern prefecture from the United States to Japan.

Residents of the area expressed anger by throwing rocks and setting fire to about 80 US military vehicles following the incident in an area called Koza, which is now the city of Okinawa.

While the whole prefecture of Okinawa was under US control after World War Two, Okinawa did not have the legal authority to prosecute US military personnel who caused an incident or committed a crime.

The unrest was seen as the symbol of anger of the people of Okinawa.

On Saturday, a symposium to reflect on it was held in the city. One of the organizers was photographer Higa Toyomitsu. He took photos of the unrest at that time.

Higa said it was the first struggle by local people that stemmed from the absurdity of having foreign military bases. He added that he hopes future generations will remember and tell the story.

About 70 percent of the US military facilities in Japan are located in Okinawa Prefecture now.

A series of criminal cases and accidents have been caused by US military personnel but Japanese authorities face restrictions in their investigation under the Japan-US status of forces agreement.