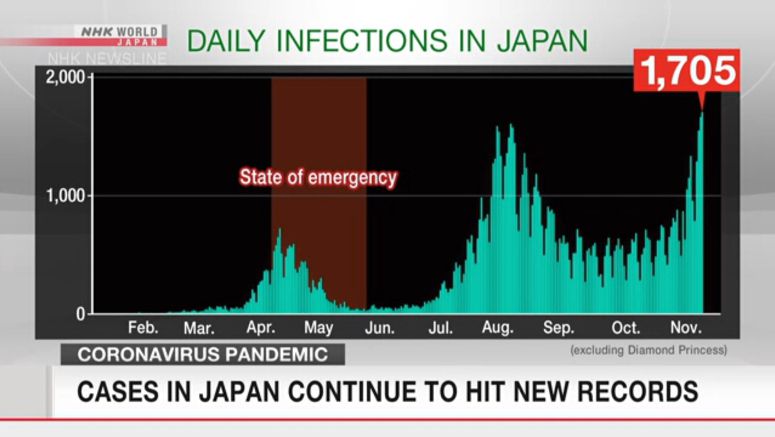 A record 1,705 new coronavirus cases were reported in Japan on Friday, surpassing the previous high set on Thursday. The prime minister is calling for renewed vigilance.

Experts say the country is experiencing a third wave of infections. In total, there have been more than 116,000 since the outbreak began. Nearly 1,900 people have died.

Medical workers are concerned about the rising number of patients. Doctors at a Tokyo hospital accepting the seriously ill say they're reaching capacity.

One said, "It may be necessary to increase the number of beds because they have been almost full since last week."

The northernmost prefecture of Hokkaido is another hot spot. More than 200 new cases were reported on Friday. Multiple clusters have been detected in a nightlife district in Sapporo. Authorities are asking restaurants and bars in the area to shorten their business hours.

Hokkaido Governor Suzuki Naomichi said, "The situation is still very severe as we try to strike a balance between social and economic activities and preventing infections from spreading."

Also on Friday, officials said more than 130 people who made use of a domestic travel campaign launched by the central government had tested positive for the virus.

The campaign aims to boost the tourism industry, which has been hit hard by the pandemic. But questions are being raised about whether it should continue.

Prime Minister Suga Yoshihide said, "I acknowledge that experts also have the view that there is no need to declare a state of emergency or review the travel campaign at the moment."