Japan Bullet Latest News From Japan About Auto, Technology, Culture, Travel, Cuisine . All you need to know about Japan !
Updated 1:49 AM UTC, Aug 4, 2020
Headlines:
Suga: Japan to act f: Japan's government says it will keep all
Govt. to set guideli: The mid-summer holidays in Japan are a t
More space planned f: The Japanese government wants Shinkansen
Fishing for 'Kanmon : Summer fishing for octopus is at its pea
2021 Lexus LC 500 Co: Lexus has presented a limited edition of
Japan mulls new meas: Authorities in Japan are racing to conta
70% of US youth see : A survey conducted by NHK's Hiroshima bu
Students face shorte: Students in Japan are having a much shor
Japanese public pay : Many people in Japan are mourning the de
Japanese curry chain: A major Japanese food chain, Curry House 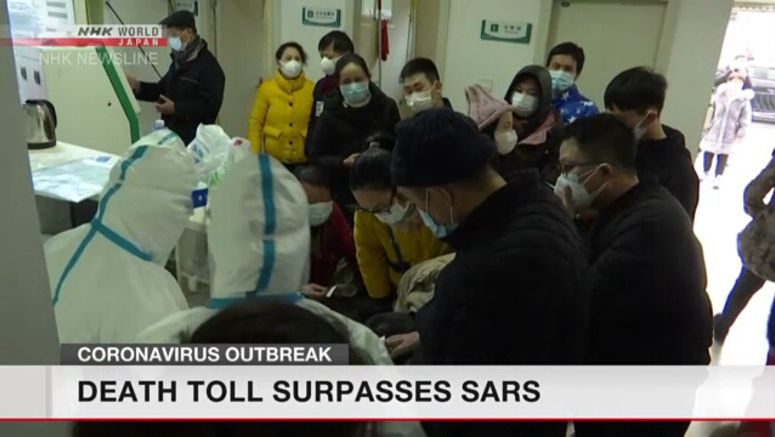 The death toll from the new coronavirus in mainland China has reached 811, surpassing the number of worldwide deaths from the SARS epidemic in 2003.

The outbreak of SARS, or Severe Acute Respiratory Syndrome, killed 774 people before the World Health Organization declared the end of the epidemic.

There were 3,000 new infections reported every day for the five consecutive days through Friday. But the figure for Saturday was lower.

The report says Leishenshan Hospital, the second to be built since the outbreak, will receive 1,500 patients.

But the growing number of serious patients has posed a challenge to medical systems.

Business activities that remain suspended since the Lunar New Year holidays are expected to resume in many areas on Monday.

But it may take some time for companies to fully resume operations, as many people have having problems returning from their hometowns due to ongoing transport restrictions.

Japan's government says it will keep all options open, in response to South Korea's moves to sell off the assets of a Japanese firm due to a wartime labor lawsuit.A South Korean court said that as of Tuesday, legal procedures to notify the Japanese side of the asset seizure order were deemed...more

The mid-summer holidays in Japan are a time when many people visit their hometowns and family. Ahead of the "bon" holidays next week, the government plans to set guidelines to prevent travelers from spreading the coronavirus.Some local leaders are worried that people living in city areas may spread...more

The Japanese government wants Shinkansen bullet trains to have more space for passengers with physical disabilities.The transport minister has suggested that the trains on the nation's busiest line connecting Tokyo and Osaka should each accommodate up to six wheelchairs.

Summer fishing for octopus is at its peak in the Kanmon Straits off Kitakyushu City in western Japan.The mollusks from the area are known to be fat, chewy and sweet as they grow in fast-moving, churning tides.

2021 Lexus LC 500 Convertible Regatta Edition Is Only For Europe

Authorities in Japan are racing to contain a surge in coronavirus infections, ahead of upcoming summer holidays. Tokyo remains the major hotspot. Metropolitan government officials confirmed 258 new cases in the capital on Monday.It's the seventh consecutive day with more than 200 infections. Across...more

A survey conducted by NHK's Hiroshima bureau has found that about 70 percent of young Americans think that nuclear weapons are unnecessary.The station conducted an online survey this year on three groups of people between the ages of 18 and 34, ahead of the 75th anniversary of the US atomic...more

Students in Japan are having a much shorter summer break this year to make up for classes that were cancelled in the spring due to the coronavirus pandemic.While August is usually a month off for students, the education ministry says more than 1,700 boards of education across the country plan to...more

Many people in Japan are mourning the death of former Taiwan President Lee Teng-hui.Lee died of multiple organ failure last Thursday at the age of 97. He contributed to Taiwan's democratization. One of his biggest achievements was realizing the first direct vote to choose the territory's president.

A major Japanese food chain, Curry House CoCo Ichibanya, on Monday opened a restaurant in India, the home of curry dishes.The restaurant in the suburbs of New Delhi was initially planned to open earlier this year, but the coronavirus pandemic put the plan on hold.