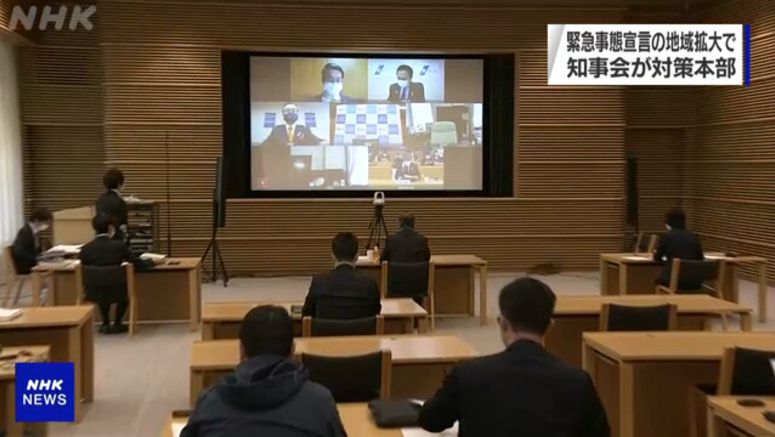 Japan's prefectural leaders want the central government to take steps to discourage people from traveling to other prefectures.

About 30 governors took part in an emergency online meeting of the National Governors' Association on Friday. The central government expanded the state of emergency for the coronavirus outbreak to the entire country on Thursday.

Osaka Governor Yoshimura Hirofumi said his prefecture has asked businesses to close, but Osaka residents are going to pachinko game parlors in neighboring Nara and Wakayama prefectures. He said he will continue to urge people not to go to other prefectures. He said he also wants the national government to allow small business owners to defer rent payments.

Hokkaido Governor Suzuki Naomichi said Prime Minister Abe Shinzo has already called on people to refrain from traveling outside their prefectures, but such requests have not been effective. He said Tokyo's Haneda Airport will soon ban people who are suspected of having the coronavirus from boarding planes. He said he wants such measures to be applied to public transport nationwide.

Aichi Governor Omura Hideaki said he will start asking entertainment facilities to close from Friday. He said the prefecture will provide subsidies of about 4,600 dollars to all operators who comply with the request. He said he wants the central government to provide funding to help the operators of suspended businesses. He called on all prefectures to unite in asking people to refrain from traveling.

Iwate Governor Tasso Takuya said no coronavirus infections have been confirmed in his prefecture, but the risks are increasing by the day. He said he wants the central government to clarify its policy on tourism ahead of the holiday period from late April through early May.

The governors adopted emergency recommendations for the central government. They are calling for compensation for restaurants and other businesses impacted by the stay-at-home requests, and want the national government to urge people not to travel outside their prefectures during the holiday period. They are also requesting more medical supplies, including masks and protective equipment for medical institutions, and swift coronavirus tests for people who need them.