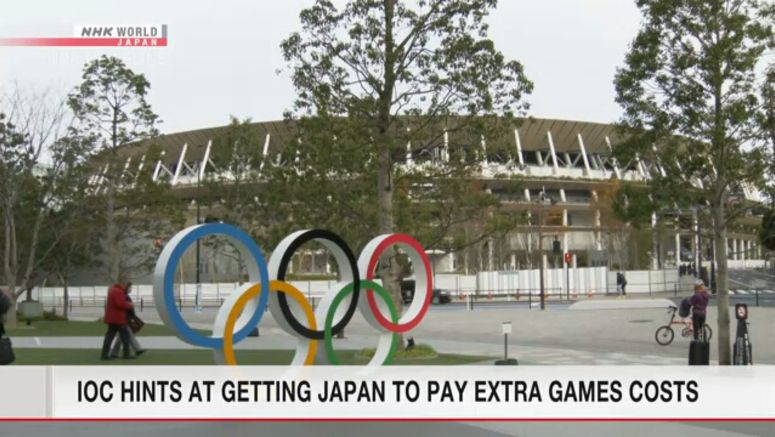 The International Olympic Committee has hinted that it will ask Japan to bear most of the additional costs related to the postponement of the Tokyo Olympics.

Due to the coronavirus pandemic, the Games have been rescheduled to begin on July 23 next year. They were originally scheduled for this summer. The postponement is thought likely to add several billion dollars to the final bill for hosting the Olympics.

The IOC released a statement on Monday in a question-and-answer post on its website. It said Japan's Prime Minister Abe Shinzo has, "agreed that Japan will continue to cover the costs it would have done under the terms of the existing agreement for 2020, and the IOC will continue to be responsible for its share of the costs."

The IOC also said the additional costs it expects to share will come to several hundred million dollars.

Japan's Chief Cabinet Secretary Suga Yoshihide told reporters that it is not factual to say the government has agreed with the IOC on the extra costs.

He said his understanding is that the IOC and Japan's organizing committee confirmed at a video conference last Thursday that the impact of the postponement, including the additional costs, is a shared concern. He said he believes that both sides have agreed to jointly continue assessing and discussing the matter.

2021 Lexus LC 500 Convertible Regatta Edition Is Only For Europe

Authorities in Japan are racing to contain a surge in coronavirus infections, ahead of upcoming summer holidays. Tokyo remains the major hotspot. Metropolitan government officials confirmed 258 new cases in the capital on Monday.It's the seventh consecutive day with more than 200 infections. Across...more

A survey conducted by NHK's Hiroshima bureau has found that about 70 percent of young Americans think that nuclear weapons are unnecessary.The station conducted an online survey this year on three groups of people between the ages of 18 and 34, ahead of the 75th anniversary of the US atomic...more

Students in Japan are having a much shorter summer break this year to make up for classes that were cancelled in the spring due to the coronavirus pandemic.While August is usually a month off for students, the education ministry says more than 1,700 boards of education across the country plan to...more

Many people in Japan are mourning the death of former Taiwan President Lee Teng-hui.Lee died of multiple organ failure last Thursday at the age of 97. He contributed to Taiwan's democratization. One of his biggest achievements was realizing the first direct vote to choose the territory's president.

A major Japanese food chain, Curry House CoCo Ichibanya, on Monday opened a restaurant in India, the home of curry dishes.The restaurant in the suburbs of New Delhi was initially planned to open earlier this year, but the coronavirus pandemic put the plan on hold.