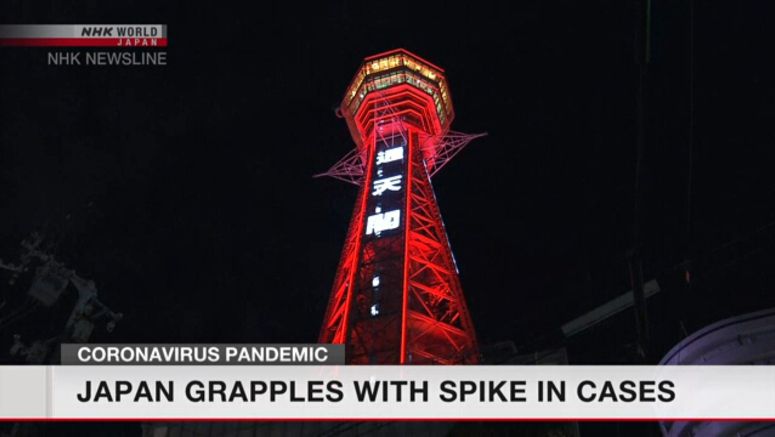 Officials in Japan's western prefecture of Osaka are urging all residents to refrain from leaving their homes for any non-essential reason until the middle of this month. This follows a surge in the number of coronavirus cases with severe symptoms.

Osaka Governor Yoshimura Hirofumi said, "It's getting harder to provide treatment to people with serious symptoms. This is the right timing to issue a red alert. It's a declaration of an emergency in medical care. Our first priority will be protecting life."

The governor says the occupancy rate of the prefecture's hospital beds set aside for serious cases is expected to soon reach 70 percent.

Officials are already asking bars and restaurants in entertainment districts to close early. They've decided to keep that request in place until December 15. That's longer than they originally planned.

Officials in Tokyo reported 533 new cases on Thursday. To date, the number of people who've tested positive in Tokyo has exceeded 42,000. 54 are currently in serious condition.

Tokyo's hospitals have 150 beds for serious cases. The metropolitan government is asking them to increase that to 200.

Officials say they want to prevent the spike in severe COVID-19 cases from affecting treatment for other diseases.

They're also asking medical institutions to allocate more beds to coronavirus cases that are not serious.

Some people with coronavirus complain of a loss of smell. A research team from the health ministry plans to test more than 1,000 infected people across Japan to study how their sense of smell changes.

Professor Miwa Takaki of Kanazawa Medical University said, "We'll ascertain the proportion of patients with aftereffects and the kinds of aftereffects. We hope this will help us identify effective treatments."

Authorities across Japan confirmed more than 2,500 cases on Thursday. Over 2,200 people have died since the pandemic began.

The central government wants to revitalize the economy at the same time as tackling the virus.

A subsidy scheme for domestic travel was due to finish around the end of next month.

Prime Minister Suga Yoshihide is now suggesting it will run for longer.