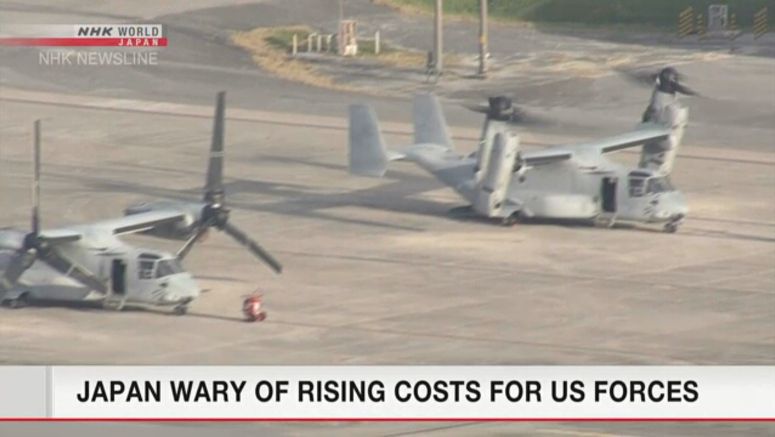 Some Japanese government officials are concerned that Washington may pressure Tokyo to pay significantly more for stationing US forces in Japan.

Bilateral negotiations on the cost will likely shift into high gear as early as this summer, with the current five-year agreement on the costs of supporting US forces due to expire in March 2021.

US President Donald Trump says he has asked Japan to sharply increase its share of the cost.

US Assistant Secretary of State for Political-Military Affairs Clarke Cooper also stressed on Wednesday that the Trump administration expects its allies to share defense capabilities and risks in addition to costs.

Cooper also said, "Any state, and this is inclusive of Japan, should be contributing more not only to their self-defense but to where we are working jointly in a regional context."

The Japanese government maintains that it has been bearing its fair share of the burden, which is high compared to other nations.

Chief Cabinet Secretary Yoshihide Suga said on Thursday that the cost is properly shared under the agreement between the two governments.

But some officials are wary that Washington may demand a steep rise in Tokyo's share of the cost during bilateral talks in the run-up to November's US presidential election.

The Japanese government is expected to closely monitor similar ongoing negotiations between the US and South Korea. Seoul is reluctant to comply with Washington's call for it to considerably increase its share of the burden.