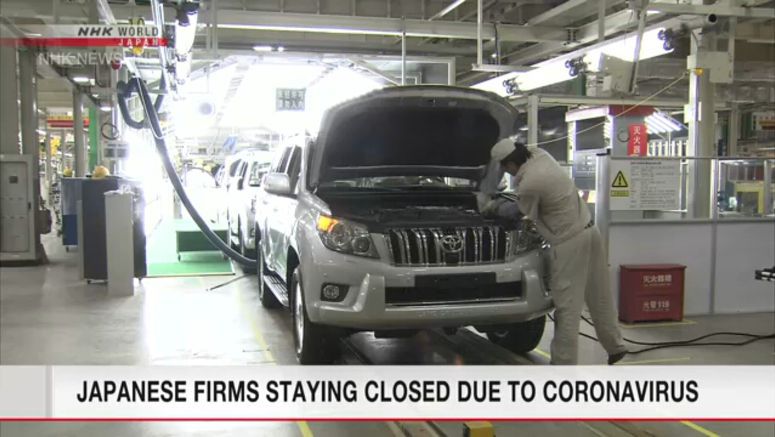 The coronavirus outbreak is increasingly weighing on Japanese companies that do business in China.

Toyota Motor has decided to further postpone the resumption of operations at its factories in four cities, including Tianjin and Guangzhou. They will remain closed at least until February16 .

Honda Motor says it will postpone the re-opening of its plant in Wuhan, the epicenter of the outbreak, at least until the week of February 17. The automaker previously said it planned to re-start production on or after Friday.

Mitsubishi Motors also postponed the reopening of its factory in Fuzhou till the week of February 17.

Cosmetic maker Shiseido's factories in Beijing and Shanghai will remain closed till February 17, while confectionery maker Ezaki Glico will keep its factory in Shanghai closed till Tuesday.

Fast Retailing, which operates casual clothing giant Uniqlo, had closed about 370 stores, or about half the group's approximately 750 stores in China, as of last Friday.

However, there are companies planning to resume operations on Monday.

Major electronics companies, including Sony and Sharp, will restart production at their factories in phases, starting on Monday.

The companies say they will keep an eye on the Chinese authorities' response, as well as employee turnout.

It is unclear if production will return to normal soon, as there are concerns about supplies of parts.

Further suspension of production in China could adversely affect output at car factories in Japan that use Chinese-made parts.

Japanese companies are closely watching the state of their supply chains.

You will be able to watch BABYMETAL's Tokyo Dome concerts from September of 2016 via their official YouTube channel on April 10 and 11. Due to the worldwide spread of the novel coronavirus, BABYMETAL postponed their Asia tour 'METAL GALAXY WORLD TOUR IN ASIA', which was scheduled to be held in...more

Johnny's & Associates have opened Twitter and Instagram accounts for their project 'Johnny's Smile Up! Project.' This project was launched to support disaster-stricken areas from the heavy rain and flooding in summer of 2018. As a result of the spreading of the new coronavirus, Johnny's...more

flumpool have revealed the jacket covers for their new album "Real" that's slated for release on May 20. You may remember the jacket covers for flumpool's debut mini album "Unreal" (released in November of 2008) in which the members were pictured nude from behind. In order to portray the...more