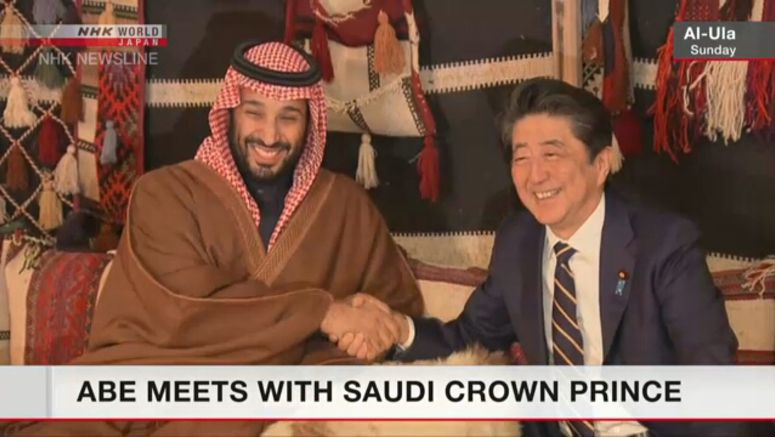 The talks between Shinzo Abe and Mohammed bin Salman were held on Sunday in Al-Ula, a city in Saudi Arabia's northwest. Earlier, Abe met with King Salman bin Abdulaziz in the capital Riyadh.

The meeting between Abe and the Crown Prince lasted about one hour. For 20 minutes, only the two were present along with interpreters. Abe wore a Saudi national costume presented by his hosts.

Abe said military conflict in the Middle East, including the involvement of Iran, has a major global impact.

The prime minister added that Japan continues an utmost diplomatic effort. He urged all relevant parties to make efforts towards the de-escalation of violence. He called for continued restraint and expressed a wish to work closely with Saudi Arabia.

The Crown Prince thanked Abe for Japan's diplomacy. He said tension in the Middle East has a negative global impact and called for dialogue.

Japan to advise citizens not to travel to Hub...

A former care home worker accused of mass killings in Japan has rejected his lawyers' argument that he is mentally unfit to stand trial.The Yokohama District Court began questioning defendant Satoshi Uematsu on Friday. The 30-year-old is charged with killing 19 people with intellectual disabilities...more

Hydrogen fuel to be used for Olympic torch relay

Organizers of the 2020 Tokyo Olympics say hydrogen fuel will be used for parts of the torch relay in an effort to promote clean energy and raise awareness of environmental issues.The torch relay is scheduled to start on March 26 at the J-Village soccer stadium in Fukushima Prefecture. The complex...more

A huge monument featuring the Olympic symbol has been lit up in Tokyo six months before the Japanese capital hosts the Games.A ceremony was held on Friday in Tokyo's Odaiba area attended by Tokyo Governor Yuriko Koike and the president of the Japanese Olympic Committee, Yasuhiro Yamashita.

With just six months to go before the start of the 2020 Tokyo Olympics, organizers are busy compiling contingency plans.The organizing committee for the Games is facing the challenge of preparing against natural disasters and other emergencies, as the country last year suffered huge damage from a...more

Narita Airport east of Tokyo is crowded with tourists from China as the Lunar New Year holiday period gets underway.Direct flights arrived from China one after another on Friday except from Wuhan, where outbound flights were grounded due to the spread of a new coronavirus almost across China.

A panel of Japanese experts says that over the next 30 years, many people living along the Nankai Trough face a higher chance of experiencing a deadly tsunami than being injured in a traffic accident.The government's Earthquake Research Committee gave the assessment in a report on Friday.

Japan to advise citizens not to travel to Hubei

Japanese Foreign Minister Toshimitsu Motegi says the ministry will swiftly raise the infectious disease warning for China's Hubei Province to the second-highest level of three. Hubei is home to the city of Wuhan, where infections of the new strain of coronavirus are centered.Motegi told reporters...more

Japan's Air Self-Defense Force aerobatic display team has practiced skywriting the Olympic rings to prepare for a ceremony marking the arrival of the Tokyo Games' torch.The team practiced on Friday, six months before the start of the Olympics.

Japan's transport minister says he is stepping up measures against a possible outbreak of the latest coronavirus. Kazuyoshi Akaba pledged an all-out effort for the expected spike in visitors from China during the Lunar New Year holiday.The government is urging airlines and cruise ships to...more

Expenses for Tokyo Games about $2.5 bil. so far

The Japanese government says the amount it has spent directly related to running the 2020 Tokyo Olympics and Paralympics has so far reached 277.7 billion yen, or about 2.5 billion dollars.The figure is for the period starting in fiscal 2013, when Tokyo was selected as the host city, until fiscal...more