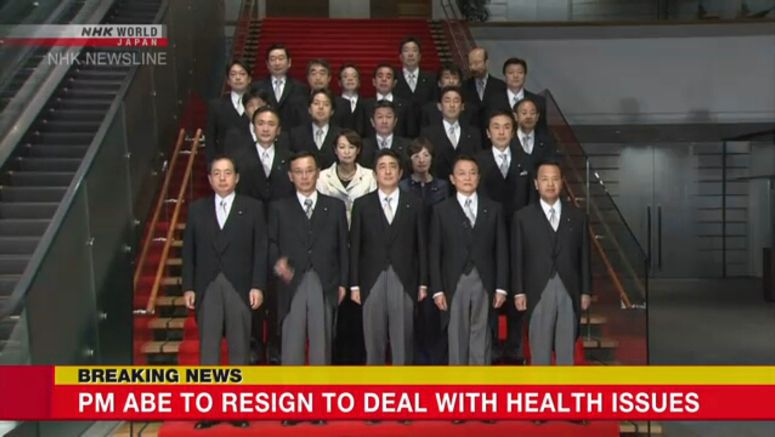 Here is a look back on Prime Minister Abe Shinzo's more than seven years in office.

Abe rode a massive wave of support for his Liberal Democratic Party back into power in 2012.

Five years after resigning from the post, he had goals in mind.

His top priority was revitalizing the economy, under a policy he dubbed "Abenomics."

The country saw results, with stocks rebounding and employment going up.

Abe also led the nationwide campaign to host the Olympic and Paralympic Games in Tokyo.

It's a success the country still hopes to celebrate.

On the diplomatic front, Abe buddied up with US presidents.

He also aimed to conclude a landmark peace agreement with Russia, that's yet to happen.

It's never been changed since it took effect in 1947, and Abe says it's time.

But when he changed the government's interpretation of the Constitution, to include the right for collective self-defense, there was fierce debate.

And the prime minister was never able to start the process to change the historic document.

Yet, allegations of corruption dogged him.

Starting in 2017, opponents threw out claims of influence peddling - first tied to a land deal.

Then they accused Abe of using taxpayers' money to entertain constituents at an annual cherry blossom-viewing party.

But perhaps his biggest challenge was global.

The coronavirus pandemic undermined economic gains -- and forced the postponement of the Olympics.