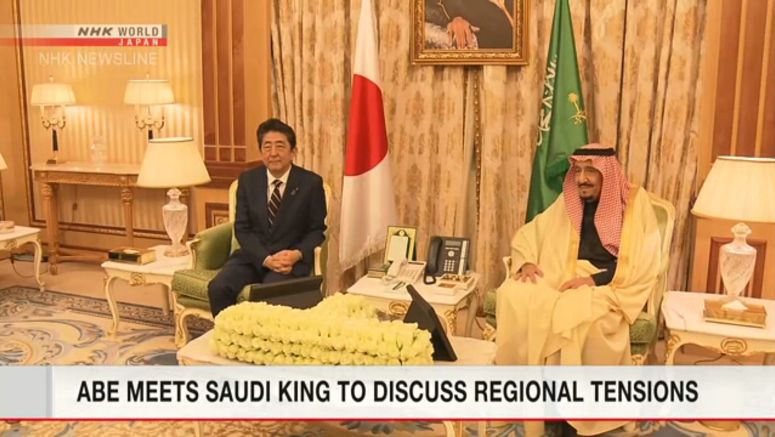 Japanese Prime Minister Shinzo Abe has told Saudi King Salman bin Abdulaziz that Japan will make every diplomatic effort it can to stabilize the situation in the Middle East.

The two leaders met in a palace in the Saudi capital, Riyadh, on Sunday. It was their third summit and the first since March 2017.

At the start of the talks, King Salman said he is glad that cooperation between the two nations has been strengthening in various fields.

The King said he hopes bilateral strategic partnerships will deepen in energy and many other areas.

Abe said 2020 is a historic year as Saudi Arabia will host the Group of 20 summit in Riyadh and Japan will hold the Tokyo Olympics and Paralympics.

The two leaders agreed to work together to make those events successful.

Abe praised Saudi Arabia's reform efforts, calling them inevitable to stabilize the Middle East. He outlined his stance of fully supporting the reform programs by accelerating cooperation in a wide range of fields, in addition to energy.

With the King describing Japan as an important partner in promoting the reform agenda, the leaders agreed to continue improving bilateral cooperation.

The iconic Nissan Skyline nameplate dates all the way back to the late 1950s. However, it wasn’t until the R32 generation came along in 1989 that the Skyline began amassing its cult following with regards to the GT-R spec.

In this week's Autoblog Podcast, Editor-in-Chief Greg Migliore is joined by News Editor Joel Stocksdale and Associate Editor Byron Hurd. They discuss news about the 2020 and 2021 Nissan Frontier, as well as a mystery Mustang and classic luxury coupes. After that, they talk about cars from the fleet...more

TOKYO — Toyota Chief Executive Akio Toyoda promised Friday that the Japanese auto industry would seek to protect jobs worldwide as it endures the coronavirus pandemic.Toyoda, speaking as head of the Japan Automobile Manufacturers Association, said he was worried the Japanese economy might be...more

2020 Toyota Highlander Luggage Test | How much fits behind the third row?

The 2020 Toyota Highlander is bigger than the model it replaces, growing some 2.36 inches in overall length. All of that pretty much went to its very end, as the cargo area aft of the third row sees the only significant increase of interior space, growing to 16.0 cubic feet from 13.8. Sounds...more

TOKYO/BEIJING — Nissan Motor Co's management has become convinced the struggling automaker needs to be much smaller, and a restructuring plan due out next month would likely assume a cut of 1 million cars to its annual sales target, senior company sources said.Even before the spread of the...more

The Toyota RAV4 is quickly cementing itself as one of the bestselling car models in the world. At the end of February, the compact crossover's total sales since the introduction of the first generation in 1994 crossed over the 10 million mark. Specifically, Toyota had sold 10,080,834 examples. And...more

You will be able to watch BABYMETAL's Tokyo Dome concerts from September of 2016 via their official YouTube channel on April 10 and 11. Due to the worldwide spread of the novel coronavirus, BABYMETAL postponed their Asia tour 'METAL GALAXY WORLD TOUR IN ASIA', which was scheduled to be held in...more

Johnny's & Associates have opened Twitter and Instagram accounts for their project 'Johnny's Smile Up! Project.' This project was launched to support disaster-stricken areas from the heavy rain and flooding in summer of 2018. As a result of the spreading of the new coronavirus, Johnny's...more

flumpool have revealed the jacket covers for their new album "Real" that's slated for release on May 20. You may remember the jacket covers for flumpool's debut mini album "Unreal" (released in November of 2008) in which the members were pictured nude from behind. In order to portray the...more