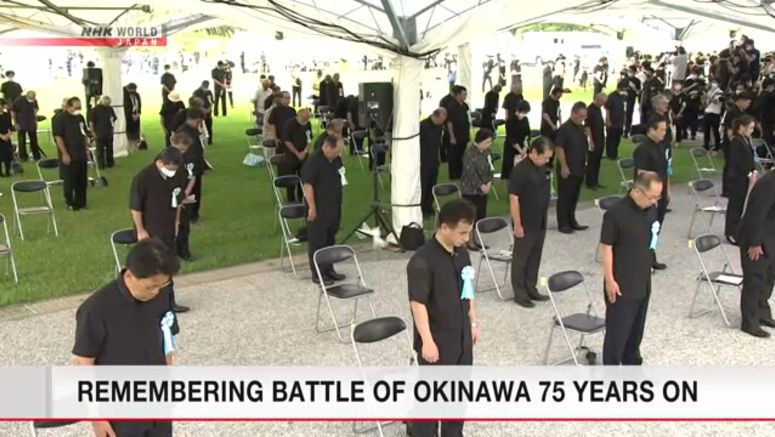 People in Japan's southern prefecture of Okinawa are looking back at one of the fiercest and bloodiest battles of World War Two. Seventy-five years ago today, Japan's military operations against US forces on the islands came to an end.

An annual memorial service was held at the Peace Memorial Park in the city of Itoman on Tuesday. This is where the last major confrontation in the Battle of Okinawa took place.

The ceremony usually draws thousands, but was scaled back this year due to concerns over the coronavirus with about 200 people taking part.

As the clock struck noon, people observed a moment of silence to remember relatives and friends and pray for world peace.

The Battle of Okinawa erupted in the closing stages of World War Two. Fighting between the US-led allied forces and the now-defunct Japanese Imperial army killed more than 200,000 soldiers and civilians.

That includes a quarter of Okinawa's population.

He said, "In the hope of keeping the memories of the abominable war from fading away and never repeating the same mistakes again, we present and share with the world, 'Chimugukuru,' the 'Okinawan Heart,' that correctly conveys the lessons learned through the Battle of Okinawa and aspires for peace."

He took a veiled jab at the Japanese government's plans to relocate a US Marine base within the prefecture, and stressed the importance of leaving Okinawa's rich nature for the next generation.

The relocation plan has put the prefecture at odds with the central government, which is pushing ahead with land reclamation work at the new site.

Many local residents feel the prefecture has been carrying a disproportionate burden. Okinawa hosts about 70 percent of US military facilities in Japan.

Prime Minister Abe Shinzo delivered a video message, since guests from outside the region were not invited this year. He talked about the sizeable American military presence in the prefecture without mentioning the base relocation plan directly.

Abe said, "For many years, the concentration of US military bases has heavily impacted the people of Okinawa. The current situation absolutely must be changed."

To commemorate the milestone anniversary, the mayors of Hiroshima and Nagasaki, as well as the UN undersecretary for disarmament also delivered video messages.