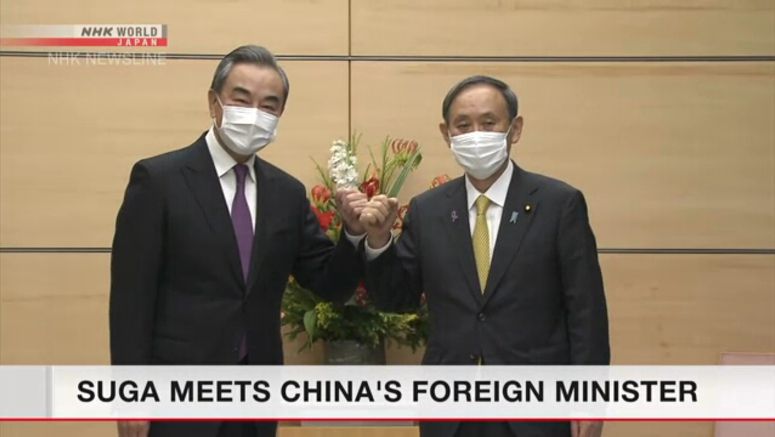 Wang made a courtesy visit on Suga at the Prime Minister's Office in Tokyo on Wednesday. They talked for about 20 minutes.

Suga welcomed Wang, saying he's glad that visits by top officials of their nations have resumed after being suspended due to the coronavirus.

He said bilateral relations are improving through communication between high-level officials and efforts by both nations. He also expressed hope for bilateral cooperation in various fields.

Wang brought up the issue of the coronavirus, saying people in Japan and China have helped each other and overcome difficulties together.

He said he's grateful for Japanese people's support for China's COVID-19 measures. He added that while the virus has not been fully contained, he is determined to completely defeat it.

Suga reiterated calls for China to act positively regarding maritime and security issues in the East China Sea, including around the Senkaku Islands.

Japan controls the islands. The Japanese government maintains they are an inherent part of Japan's territory. China and Taiwan claim them.

Suga also asked that China lift its import restrictions on food from Japan.

He expressed Japan's concern about the situation in Hong Kong. He called for China's cooperation in dealing with North Korean issues, including abductions of Japanese nationals by North Korean agents.

Suga and Wang also confirmed their cooperation for the success of next year's Tokyo Olympics and Paralympics and the 2022 Beijing Winter Games.