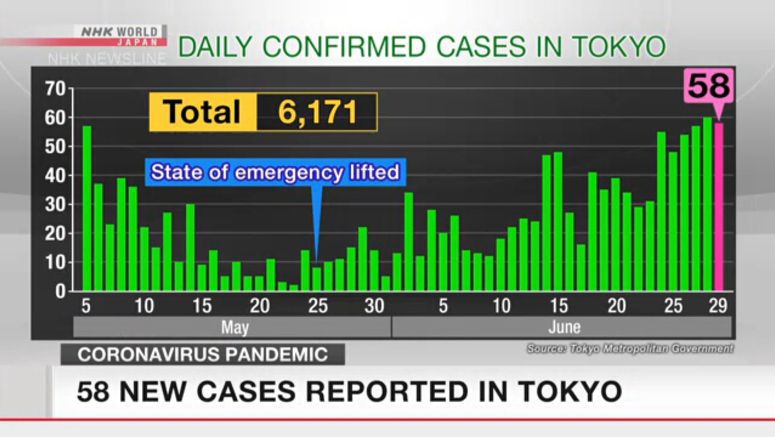 Tokyo officials say 58 new coronavirus cases were confirmed on Monday. The number of infections has been on the rise in recent days, but the government says there's no need to declare another state of emergency.

The latest figure is slightly smaller than Sunday when the daily tally was the highest since the nationwide state of emergency was fully lifted last month.

Officials say about 40 percent of people who tested positive in Tokyo over the past week have either worked at, or visited nightclubs.

A group infection was also confirmed at a nightclub in a neighboring prefecture.

Health officials are also singling out small karaoke bars as a source of infection in the city of Otaru located in the northern prefecture of Hokkaido.

36 people have tested positive and one person has died. Among them are retirees who often visit the facilities during the day.

The Chief Cabinet Secretary says there's no immediate plan to declare another state of emergency or ask people to stop travelling between prefectures.

Suga Yoshihide said, "After the declaration was lifted, a certain number of new infections have been confirmed, mainly in Tokyo. However, the results include those who were in close contact with infected people, regardless of whether they have symptoms themselves."

One infectious disease expert says now is the time to prepare for another possible surge in infections.

Professor, Hamada Atsuo at Tokyo Medical University says, " If the virus starts to spread rapidly, it will be difficult to deal with a second wave of infections. We should do all we can to avoid that."

Hamada is calling on local governments to proceed cautiously, noting that restrictions on overseas travel is expected to ease in the coming months.

Aquarium in Okinawa closed amid surge in case...

The coronavirus shows no signs of a summer slowdown in Japan as the upward trend continues. Officials are turning a worried eye to the season's upcoming holidays.Prime Minister Abe Shinzo is calling on people to keep taking thorough measures against the virus.

The Tokyo Metropolitan Government reported 258 new cases of the coronavirus in the Japanese capital on Monday.The daily tally was under 300 for the second straight day. The total number of coronavirus infections in Tokyo has now reached 13,713.

A group of ruling party lawmakers is seeking legislation for surveys of the Senkaku Islands and the surrounding waters to strengthen Japan's effective control over them.The move comes as Chinese government ships are increasing their activities in waters around the islands. Chinese patrol boats have...more

Major Japanese automakers are returning domestic factories to normal production levels. The companies say global demand for automobiles is on the mend .Eight Japanese carmakers were forced to adjust output due to the pandemic.

Major Japanese retailer Seven & i Holdings is to buy a US refinery's chain of convenience stores for 21 billion dollars.Marathon Petroleum Corporation's Speedway unit has about 3,900 gas stations with convenience stores across the United States. That makes Speedway the country's third-largest...more

The Japanese government has released revised figures for the January-to-March GDP. They show the country's economy shrinking at an annualized rate of minus 2.2 percent in real terms.The number released by the Cabinet Office is the same as the previous figure. The latest revision includes economic...more