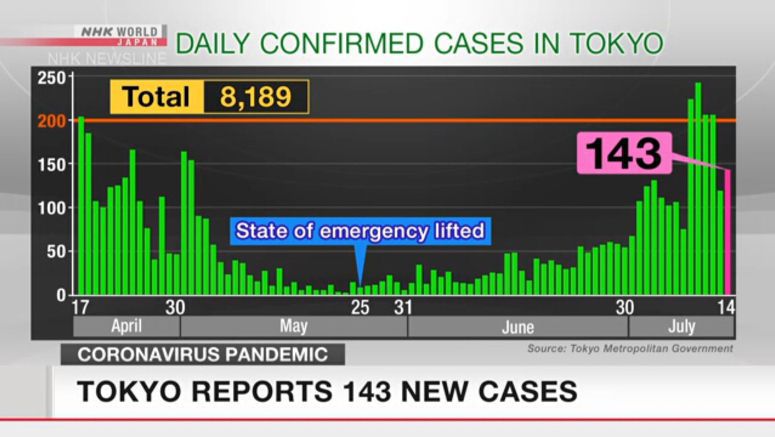 Officials in Tokyo are considering how to respond to clustered coronavirus outbreaks that contributed to a recent rise in infections. This week's daily numbers have hovered in the mid-100s ... after figures topped 200 for four straight days.

The officials confirmed 143 new infections in the capital on Tuesday, bringing the city's total to nearly 8,200.

Many of the recent cases are among young people who work at or have visited nightlife districts.

Japanese Economic Revitalization Minister Nishimura Yasutoshi, who is in charge of the government's coronavirus response, said on Tuesday, "The number of infected people is increasing considerably. We have to deal with the situation with a sense of crisis."

Nishimura said officials and experts will discuss if night clubs that don't act in accordance with anti-virus guidelines should be asked to close.

Cluster infections have also been confirmed outside nightlife districts. That includes about 40 actors, staff members and patrons at a theater in central Tokyo.

A woman who attended the performance said the venue was a crowded, enclosed space. She said, "The space between rows was less than one meter. I had to move my legs to let people pass. And the space between seats was just wide enough, too."

Health officials are asking 850 people who worked at or attended shows over the course of a week, to take a virus test.